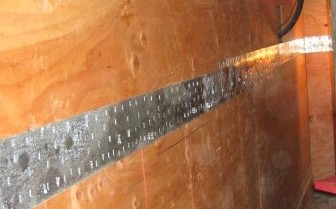 In existing retrofit shear walls, it is quite common to find plywood with unblocked horizontal seams.  This is because it is perfectly legal to build unblocked shear walls under the voluntary seismic upgrade provisions of the California Building Code.  The presumption is that if it might help, and won’t hurt, why regulate it.  Regulation will be a disincentive to doing anything at all.

In the case of one Bay Area City- Berkeley, California: this has resulted in tens of millions of dollars being wasted on ineffective retrofits.  On a statewide scale, the waste is several magnitudes greater than this.  Most certainly in the hundreds of millions.

This issue is also raised in this 2011 New York Times article:  Seismic Retrofits Offer Shaky Assurance in California. Nothing has changed since then.

Unblocked plywood edges are a natural consequence of this complete lack of regulation.

Now that we understand why unblocked shear walls are so common, what do we do about it?

The most common way of addressing this problem is by removing the plywood, installing the blocking, and rebuilding the shear wall.  This is a very labor intensive and expensive process.

Another option is to use Technical Note N370C

This Technical Note states: “Allowable shear values for blocked structural panel diaphragms are significantly higher than those for unblocked diaphragms.  Where blocked diaphragm values are required, panel edges are typically blocked with 2x lumber framing and fastened in accordance with recognized schedules in order to achiever desired shear values.  There are instances, however, where installation of lumber blocking may not be convenient.  One alternative is to substitute sheet metal strips for lumber blocking at panel joints.  The technique has been evaluated by APA-The engineered Wood Association and is discussed in the Technical Note.”

Here is an example of a shear wall that does not have blocking on the horizontal seam.  If it had been blocked, you would see horizontal rows of nails on each plywood edge where the two pieces of plywood meet as shown by the red lines.  At the same time, the blue line marks and unblocked vertical joint. If it were blocked, you would see a row of nails where the blue line is located. 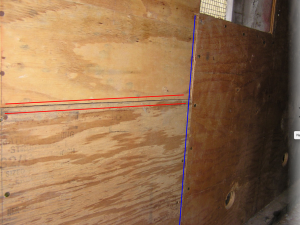 Unblocked shear walls are a problem because the unblocked seam interrupts the load path between the foundation bolts and the floor framing.  This is made clear in APA Research Report 154 page 7.

Using the information in APA Technical Note N370C we are able to leave the plywood in place and block the shear walls with sheet metal blocking.  According to the Technical Note the strongest stapled connections can be made with 7/16″ 14-gauge staples.  These 14-gauge staples and the guns that shoot them are no longer available.  However, 16-gauge 7/16″ and 16-gauge 3/4″ long staples are available 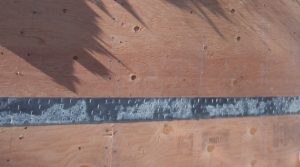 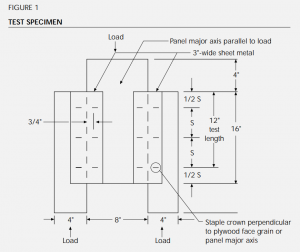 Below is an email I received from the technical support office at the American Plywood Association.

“The “S” in the in Figure 1 is the Spacing of the Staple in the test specimen which would be equal to 4”. There was a specific test program done for the evaluation and technical note. Without testing, I cannot comment on the particular arrangement you are asking about. However, I do have the following additional notes:

Translated: They did not do very many tests- which is bad.

“Published values can be used by an engineer to calculate the shear transfer at panel joints using stapled sheet metal blocking in lieu of solid wood blocking.”

Translated: They published the values in Table 1 so that engineers should feel comfortable using the staple capacities found in that Table and sheet metal is a suitable substitute for wood blocking- which is good. 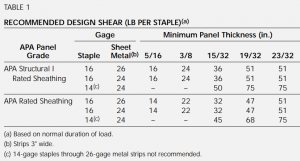 “When sheet metal blocking is used for horizontal diaphragms panel edges should be tongue-and-groove or supported by panel edge clips to prevent loosening of fasteners when subjected to foot traffic or construction loading.”

I wrote back and asked the APA about this as it applies to shear walls. This is the response.

“N370 was based on horizontal diaphragms. The comment on panel clips was related to a horizontal diaphragm – like a roof. The idea being if there are construction workers on the roof to prevent loosening of fasteners when subjected to foot traffic or construction loading because of the differential movement between the panels. There would be no need for panel clips on a vertical wall surface.”

Translated: Shear walls are vertical, so there is no need for plywood clips.

Translated: You can space the staples as close together as you want to and use the published values in a design, but you should be aware staples were never tested closer together than 2″.  Because we are a testing lab and we will be held accountable for anything we say that is not supported by testing, we cannot recommend anything less than what we tested.

“APA does not recommend sheet metal blocking for high shear loads. In the past two former APA staff engineers suggested (a suggestion only) if using sheet metal for high shear consider two rows of staples with minimum fastener spacing of 2 inches.”

In retrofit applications 6″ wide strips with 2 rows of staples 1″ O.C. are used.  This aligns itself with the opinion of the two APA engineers.  However, 6″ wide sheet metal is a deviation from the 3″ wide sheet metal used in the tests.

Even though all the testing was done in horizontal diaphragms the APA told me in another email that they saw no reason why it will not work for shear walls. The tests included used plywood clips, retrofit applications do not.  The American Plywood Association discounted this last variable.

Very experienced specialists in shear wall performance speculated that sheet metal blocking could be used for high shear loads if two rows of staples were installed along the top and bottom of a 3″ strip rather than one row.  Whether or not a 6″ wide strip could diminish or increase performance is unknown.

Sheet metal blocking is not suitable for 3/8 plywood which must be torn out in all cases based on its poor performance in the Northridge Earthquake.

Extrapolating from the information in this Technical Note we can presume 2 rows of 16-gauge staples top and bottom of a 6″sheet metal strip have 864 lbs. of shear resistance.  If we factor in a possible 25% reduction in recognition of the two unknown variables: the sheet metal strips being 6″ wide rather than 3″ wide, and two rows of staples are used rather than one.

It is not unreasonable to presume this configuration can resist 648 lbs. in shear which can be classified as a high-capacity shear wall.  The actual value may be higher than that and the capacity could be increased by adding another row of staples.

Speaking With the Homeowner

As stated previously it is perfectly legal for a contractor performing a “voluntary seismic upgrade” to build unblocked shear walls.  This is why they are so common.  When evaluating an existing retrofit, one must tell the homeowner they will need to tear out all the plywood and more or less start over, or they can repair the shear walls with sheet metal blocking at a fraction of the cost.

If an owner desires to retrofit his home to a high standard, build shear walls on each wall line where the cripple walls are not covered with unblocked plywood.  For added minimal cost lateral resistance, repair the existing shear walls with sheet metal block so that the old work adds additional lateral support.