Foundation Bolts – What They Do and How They Do It

Bolting a house is not the same as a seismic retrofit.  Foundation bolts in an earthquake retrofit are only one component in a three part system.  Without the two other parts, plywood and shear transfer ties,  the bolts are literally decorative.  As you can see below, when the earthquake force pushes against the floor it can only make it into the bolts if it follows the “load path” provided by plywood, shear transfer ties, and bolts.   All retrofit strategies are directed towards transferring the force into the bolts using plywood and Shear Transfer Ties, otherwise the house can be severely damaged.  The size of the bolts does not matter. it is only the capacity that counts.

A 1/2-inch bolt with a Mudsill Plate can resist 1340 pounds of earthquake force.

What Do Foundation Bolts Do?

It is important to realize bolts without plywood and shear transfer ties, as illustrated in the drawing above. don’t do anything.

The image to the left shows the lower portion of a cripple wall, which is also the base of a shear wall once the cripple wall has been converted into a shear wall.  The red arrow represents earthquake forces pushing on the mudsill.  If the mudsill moves on the foundation, the entire shear wall will move, taking the house with it. 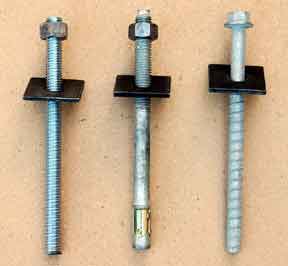 There are a few types of retrofit foundation bolts:  epoxy bolts, wedge anchors, Titens, and  Simpson Strong-Tie UFP IOs.  These all are used to attach the base of the shear wall (the mudsill) to the foundation.  All of them have been tested for their ability to resist earthquakes and are approved by all retrofit guidelines.

Use Only Tested Foundation Bolts

It is critical that the bolts have been tested in independent research laboratories to make sure they will be effective in your retrofit.  We use industrial bolts Manufactured by Hilti, a Liechtenstein-based company known for producing the highest quality bolts available.   Tested bolt shear values are on page 8, International Code Council’s Evaluation Service Report 2302.

Some people wonder if a bolt will work in an old foundation without rebar in it.  Tests have shown that old foundations do just fine.

A 1992 test report, “Foundation Anchorage Systems,” published by the Structural Engineer’s Association of Southern California, came to the following conclusion regarding old foundations without rebar.

“The difference in the strength of the concrete did not appreciably affect the performance of the foundation anchorage systems (Bolts).  Engineered or prescribed methods for retrofitting foundations of good concrete will also work with foundations of weaker concrete (approximately 1500psi).  The predominant failure mechanism in these anchorage connections was the wood sill plate in both the good and weak concrete foundations.”

This test used bolting systems of all types including epoxy bolts, wedge anchor foundation bolts, and side plates.  Side plates are a type of house bolting hardware suitable for homes with short or no cripple walls.

When dealing with clearly deficient foundations like those shown here, the most effective method without replacing them can be found in a portion of this video on old foundations that discusses brick and marginal foundations. 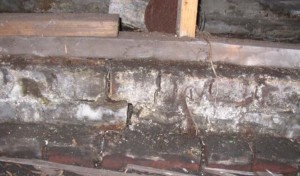 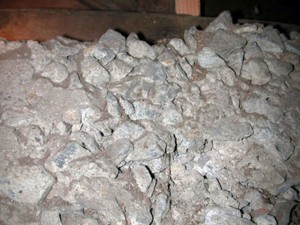 What if the Foundation Slides on the Ground?

Most seismic retrofits are installed on older foundations with shallow footings  (this means they are not very deep in the ground or sit on top of the ground), so it is important to understand their performance characteristics.  Some people worry the foundation will slide on the ground.

The answer is: So what?  The house, ground, and foundation will all move together. The problem arises when the ground stops and inertia causes the house to keep moving off of the foundation.  That is why re-enforcing steel (rebar), age,  depth and size of the foundation are usually not a serious concern.

Many people think the only way an effective retrofit can be performed is if the brick foundation is replaced.  Based on my research this is not the case. Please see the research I did on brick foundations.

What if the House is Already Bolted?

Existing bolts can rarely be used because they almost always have over-sized bolt holes.  This can weaken a bolt by 59% according to tests done after the 1994 Northridge earthquake. 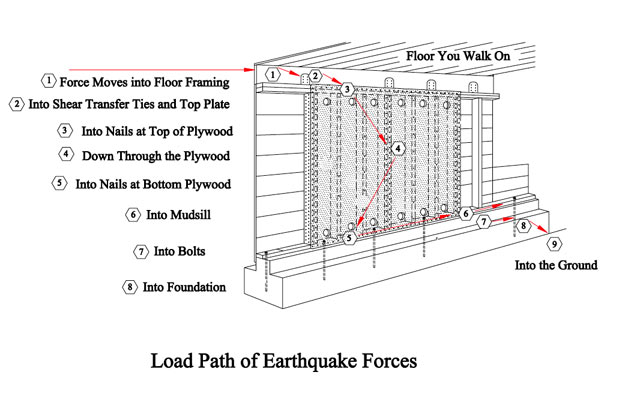 ALL EARTHQUAKE FORCES GO INTO THE BOLTS