Will Your House Survive The Next Big Earthquake?

If You Don’t Know, You Better Find Out

Here are a few videos related to common structural weaknesses. A written description is at the bottom of this page and may be all you need to understand your house.

This video looks at why attaching the floor to the foundation is so important and why it is not necessary to worry about the rest of the house.

This video looks at the materials these old houses are made of and looks to see which ones are already strong enough.

This video shows why most of your house will sustain minimal damage to the living area above the crawl space even if you don’t do a retrofit.  The house can still fall off its foundation if it is not retrofitted, but history has shown that houses that fall off their foundation are repaired 99% of the time and placed back on their foundations.  I know this first hand after doing earthquake damage inspections for FEMA.  Putting a house back on its foundation is expensive because contractors are in such demand after an earthquake. For this reason it may take over a year to have your house repaired.   Here you will see why attaching a house to its foundation with a retrofit can prevent earthquake damage.

This video contains numerous photographs of damage that occurs if you don’t retrofit your house.

The 1964 Alaska earthquake, which lasted a record-breaking 4 1/2 minutes, jolted this house off its foundation.   Remarkably, the house is fairly intact. The walls did not collapse, the roof did not cave in; even the windows did not break. Here you will learn why houses like this, and probably yours, can do so well.  Preventing earthquake damage is actually quite simple.

THIS HOUSE WOULD HAVE REMAINED FULLY HABITABLE IF A RETROFIT  HAD ATTACHED IT TO ITS FOUNDATION. 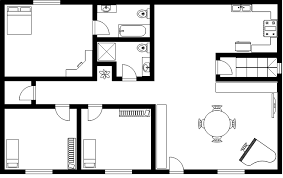 A house is a cuboid (box-shaped object). The base of the cuboid is the floor, the sides of the cuboid are the walls, and the top of the cuboid is the roof. Inside this large cuboid are lots of smaller cuboids in the form of bedrooms, hallways, bathrooms, etc. All these cuboids work together to form a very strong geometric shape.  This keeps a house more or less structurally intact above the first floor.  This shape will automatically prevent earthquake damage.

The interior walls that create these cuboids are called cross walls.  The more cross-walls a house has the stronger it will be. 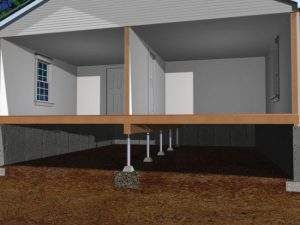 THERE ARE NO CROSS WALLS IN THE CRAWL SPACE AND ONE IN THE LIVING AREA. THIS MEANS THE CRIPPLE WALL IS WEAKER THAN THE REST OF THE HOUSE.

In practical terms, it means if you can keep a house on its foundation with a good seismic retrofit.  The cross walls in the living area will protect the rest of the house.

On the other hand, the crawl space is not protected by cross walls which makes it very weak.  This is why all retrofitting takes place in the crawl space. 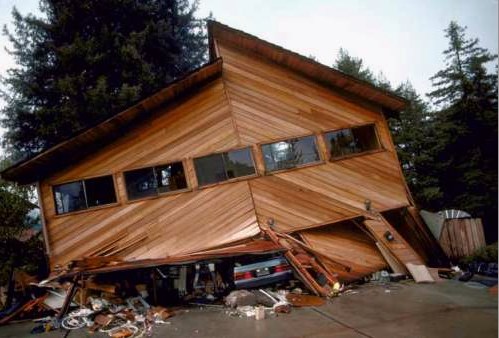 THIS SANTA CRUZ HOUSE FELL IN THE 1989 SAN FRANCISCO EARTHQUAKE NOTICE THE WINDOWS DID NOT BREAK.

This Santa Cruz house is an especially interesting case where cross walls prevented catastrophic damage to the living area.  On the other hand, the garage did not have cross walls to protect it.  Of particular interest is the intact row of windows at the front.  This shows how strong the cuboid shape is and how it can prevent earthquake damage.

THIS HOUSE FELL FROM ITS FOUNDATION IN THE 1992 FERNDALE EARTHQUAKE IN CALIFORNIA. THE AUTHOR OF THIS ARTICLE WAS THE FIRST FEMA INSPECTOR TO EVALUATE IT.

The Same Ferndale House: Earthquake Damage On The Inside 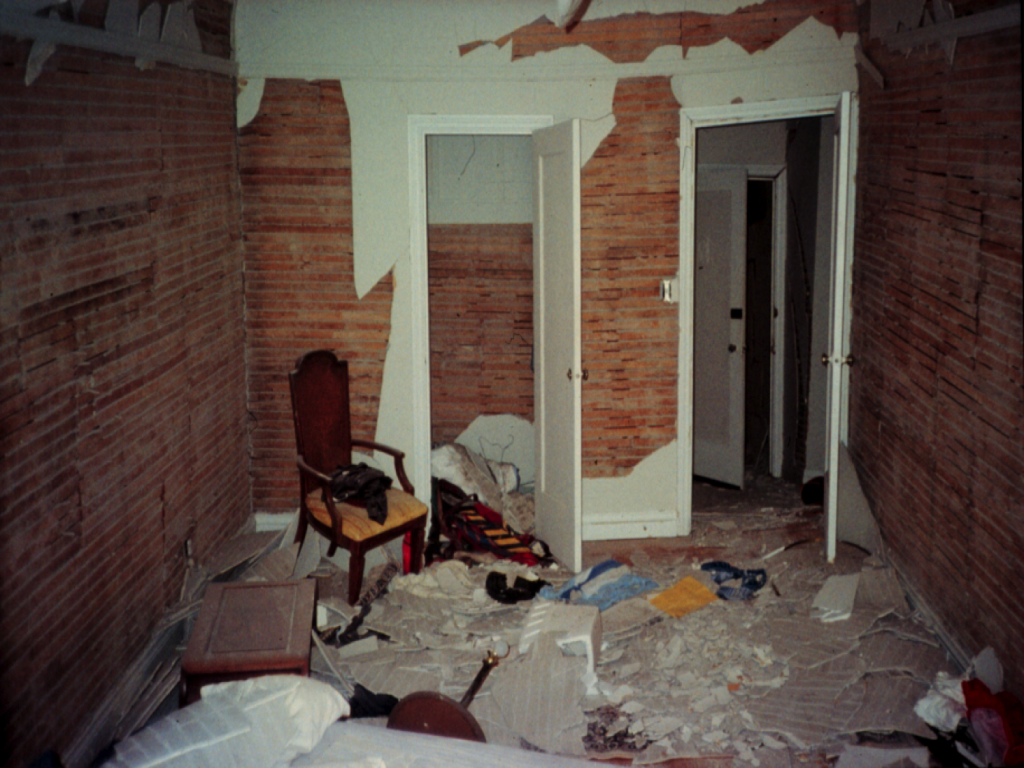 Even if the cubic shape holds the house together, if it falls from its foundation it can still sustain catastrophic damage to the interior walls, plumbing, and electrical systems.  If the walls and ceiling are plaster, it is very common for the plaster to fall off the walls as shown here.  This is because plaster, which is simply a thin layer of concrete, is so brittle.  This kind of damage does not occur with sheet rock. 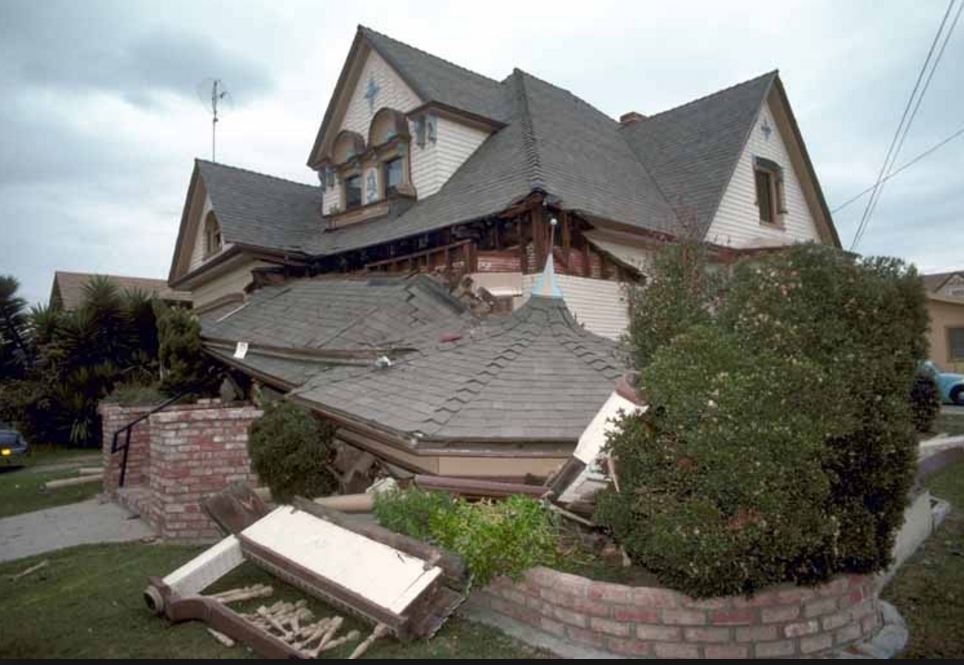 I was the FEMA inspector who evaluated this beautiful house in Watsonville after the 1989 San Francisco Earthquake.  It suffered a cripple wall collapse.  Two weeks later I drove by and saw an empty lot.  Except for the porch, viewed from the outside this house suffered minimal structural damage.  The interior was another story. If it had remained on its foundation someone would still be living there. 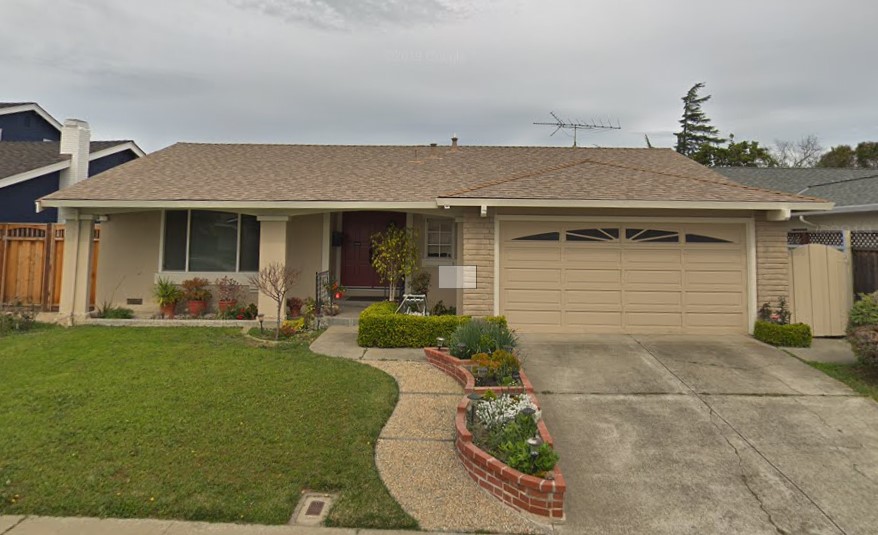 This is a typical tract house found in the newer parts of the Bay Area.  Almost all of these homes were built according to building codes that made sure the living areas were extremely earthquake resistant.  Unfortunately, even though most of these houses are bolted, the code failed to strengthen a very vulnerable floor connection.  This weak connection could result in the house sliding on top of the foundation.  These houses need No Cripple Wall Retrofits.

What Does The Building Code Say?

Before retrofitting a must be looked at for weak spots.  Tables such as the one below allow you to look at the old building materials, called archaic materials, your house is made of and evaluate its current earthquake resistance.  The table for example tells us that plaster on wood or metal lath – that means plaster on wood or stucco on chicken wire – can resist 900 lbs of earthquake force for each linear foot.  Well-nailed plywood can only resist 870 lbs per linear foot.  This further explains why living areas do not collapse.  Many archaic building materials found in older homes such as plaster are no longer used, but we still need to know how strong or weak they and this table allows us to do so.

Most houses in the Bay Area have some combination of archaic materials.

Table A1-D can be found in  Appendix A Gudelines for the Seismic Retrofit of Existing Buildings  and the California Historic Building Code.

Structural engineer Nels Roselund, was involved in studies to prevent earthquake damge for the past 50 years. He told me Table A1-D was the result of some testing done by the Structural Engineer’s Association of Southern California, including himself, many years ago.  These tests are sometimes referred to as the Rockwell Tests because Mr Kariotis negotiated with this rocket ship manufacturer (purchased by Boeing in 1973) to use their facility and testing equipment to conduct these tests.

The testing equipment at the Rockwell lab was very advanced.  It was normally used to test the performance of rocket ships such as during take-off, wind turbulence, upward and downward drafts, and landing.   This testing equipment could be calibrated to create an environment almost identical to an earthquake.

Why These Tests Are Important

For example, the research team would build a wall made of “Plaster on wood or metal lath” and then subject it to these simulated earthquake forces.  As demonstrated in the table above, a test proved this combination of archaic building materials can resist 600 lbs per linear foot.

“Horizontal diaphragms” is a fancy word for floors or roofs.  When placed vertically they are called shear walls. In other words, existing houses already have shear walls made of plaster, stucco, sheet rock, and wood siding.  The video below looks how these old building materials were tested in a rocket ship testing center.

As a rule, most designers use 1/3 of the strength value.  The strength value is the strength of the archaic material as demonstrated by tests.  This is done because one never knows if the archaic material was installed correctly.  Even if it was not installed correctly, the assumption is that its strength will equal 1/3 of the tested value. The table below is identical to the table above except a  safety factor is built-in.  For example, rather than a plaster cross wall being able to resist 600 lbs per linear foot it can only resist 1/3 of that or 200 lbs per linear foot.  This table tells us why existing building materials prevent earthquake damage.

This table can be found in the 1997 Uniform Code of Building Conservation. The safety factor, also known as an allowable value, is built into the table.  Notice how the values are 1/3 of those shown in the strength value table. 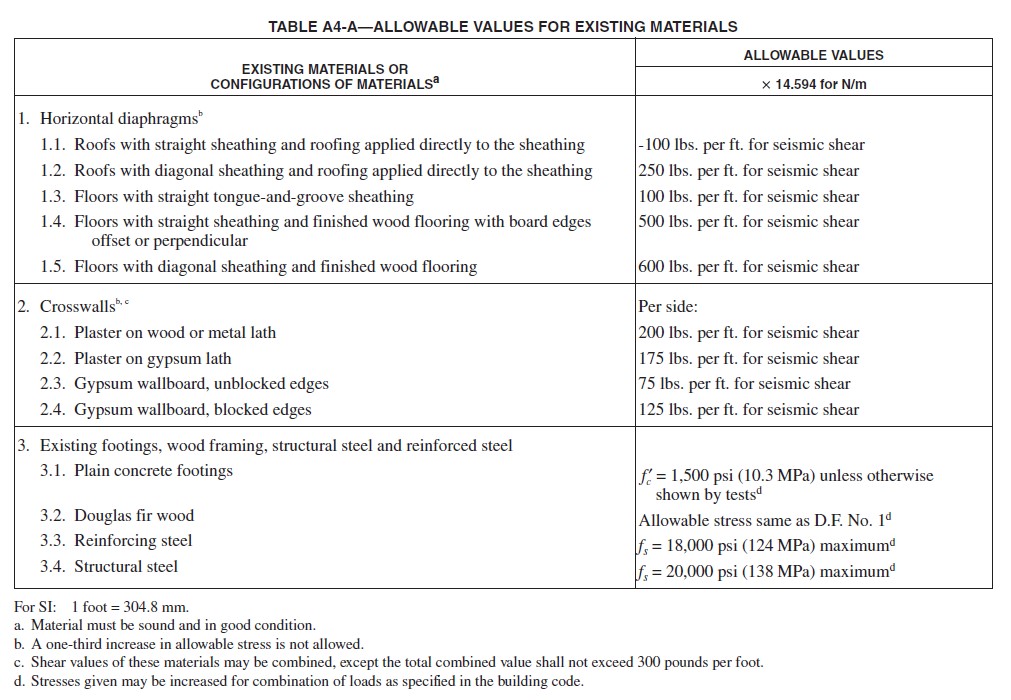 Let’s say a designer is looking at a wall that is 10 feet long with plaster on one side and horizontal wood boards on the other.  This is what is on the outside walls of an older home.   Adding the 100 lbs. per foot for seismic shear from item 1.3 to the 200 lbs. per linear foot from item 2.1 this wall can resist 3000 lbs of earthquake force  (10 x 300lbs). 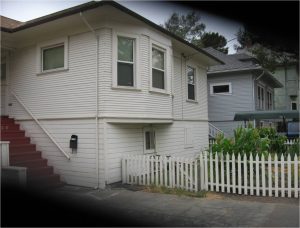 On the other hand, the wood siding (a vertical horizontal diaphragm)  only has “straight tongue and groove sheathing”on on the outside of the cripple wall, and nothing on the inside .  According to item 1.3 walls built like this can only resist “100 pounds lbs per ft. for seismic shear.”  This is a minimal amount of earthquake resistance making this house subject to collapse.

How Does This Information Help Me?

“Plaster on wood or metal lath” is the same as stucco.  Notice it is twice as strong as wood siding.  That is the reason why houses with stucco siding  do so much better than houses with wood siding.