This is part of a presentation I made to an International Code Council Committee developing guidelines for the seismic retrofit of one and two story dwellings.

This detail addresses a very common framing configuration where the end joist sits on top of the studs and there is no top plate. 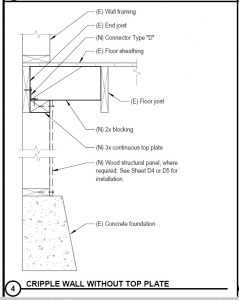 Homes built like this are always made with rough sawn full dimension lumber. The studs are 4 inches wide the end joist is 2 inches thick.  If the new 2 ½” thick 3x is installed on top of the studs as shown here, 2 ½” will be added to the 2 inch thick existing joist for a total of 4 ½: The stud wall is only 4 inches wide so once the 3x is positioned as a top plate, it will not be possible to nail the plywood to it. 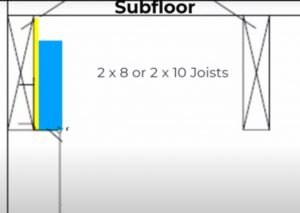