This is an interesting video that shows the reaction of a house on a shake table before and after shear walls were built.  Hold-Downs were not used. It takes a trained eye to know when and when not to use them.

What are Hold Downs?

Shear walls must resist lateral forces that would make the house slide off its foundation.  At the same time the earthquake will try to flip the shear wall over. This is known as overturning.  Overturning is resisted with special hardware called Hold-Downs. This video and text explain the basics behind overturning of shear walls and how Hold-Downs prevent this from happening.  Watching the video first will make the text easier to understand.

Overturning forces primarily act upon tall shear walls, much as a tall chest of drawers flips over if pushed across the floor from the top.  A short squat dresser will not have this tendency, which is why overturning of shear walls is not a major concern in most cripple wall retrofits.  Generally, it is a waste of money to install overturning hardware, known as Hold-Downs, on short shear walls.

This is an example of a shear wall trying to overturn as shown by the half circle arrows.  The weight of the house prevents the shear wall from overturning, so it does not need hold downs.

When are Hold Downs Necessary?

If the earthquake force is strong enough the cripple wall is tall and will therefore tend to tip over.  Usually, the weight of the house will prevent the overturning but if not, Hold-Downs are necessary.

This diagram explains the simple science behind overturning and when hold downs are required to resist it.

Here is an example of a shear wall overturning and the kind of damage that can occur. This drawing is exaggerated in order to illustrate what happens.  Most of the damage occurs where the plywood lifts up and away from the mudsill.

Overturning of shear walls damages the plywood to mudsill connection.

The shear walls on either side of this garage door opening were tall and narrow which cause them to overturn. 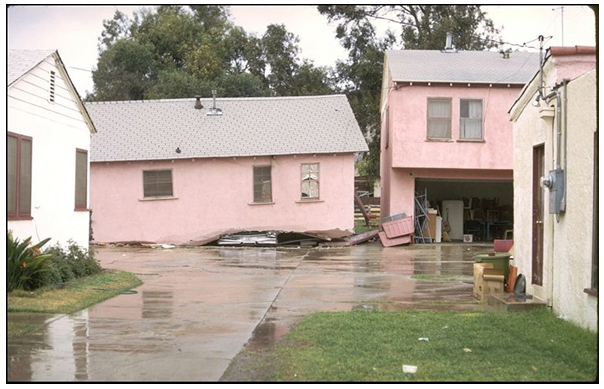 The building on the left used to be two stories. This collapse was caused by overturning of tall, narrow shear walls on either side of the garage that could not resist the overturning forces.   Even if this house were bolted, it would not have made any difference unless it had hold downs to resist this force.

The hold-down hardware shown at the ends of the shear wall in the figure above are designed to resist overturning forces.  One hold down is connected to the vertical framing at each end. 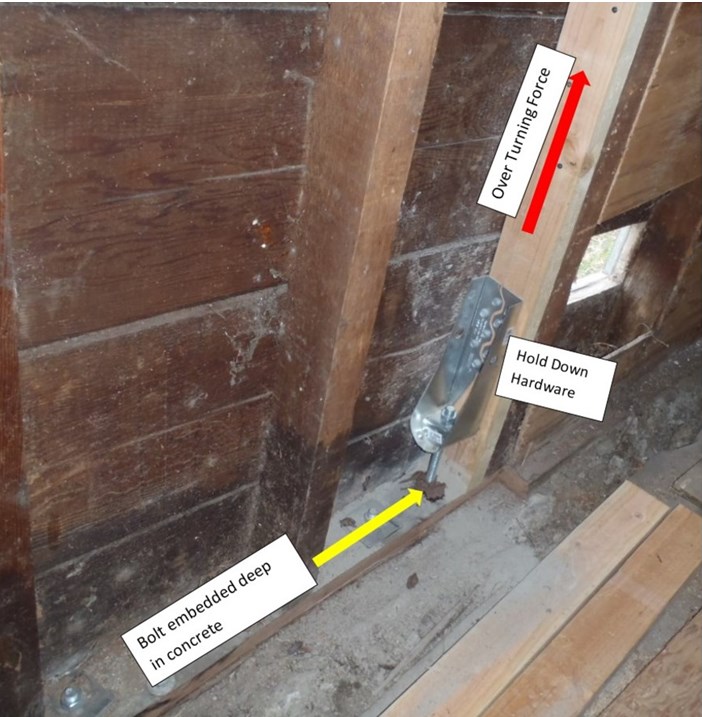 HOLD-DOWN AT END OF SHEAR WALL, THERE IS ANOTHER ONE AT THE OTHER END.

The best way to make sure overturning is resisted is by adding new foundation on either side of the shear wall as shown below. The piece of hardware on the bottom right is a holdown and it is attached to a large mass of concrete underneath it. When the shear wall tries to overturn it pulls up on the concrete and the weight of the concrete keeps the wall from overturning.

When two shear walls adjoin each other it is critical to connect them together so they do not come apart. Notice how the shear wall on the right is overturning and pulling up on the common joint while the shear wall on the left is pushing down at the common joint. The pulling up force is called tension and the pushing down force is called compression. The green “Ls” represent holdowns that prevent this from happening.