This article could never have been written without the insights and guidance provided by research scientist and engineer Ed Keith.  He has 44 years of shear wall testing experience with the American Plywood Association, the largest shear wall testing laboratory in the world and for all he has done for me, a kind and helpful human being.

In a typical seismic retrofit we attach all four sides of the house to the foundation but we can also retrofit with three foundations.  This applies to both retrofits with and without cripple walls.

Sometimes it is not possible to use all four foundations because on one side obstructions, deteriorated foundation, mudsills embedded in concrete, etc. make it impossible. These houses can still be retrofitted by using the three foundations that are accessible using the principle of rotation discussed in this article.  These same principles are used in some soft story retrofits.

Below is an illustration of a house floor viewed from the top.  The blace lines that extend left to right are the floor joists which support the floor you walk on.  The reason these lines are at an angle will be explained shortly. 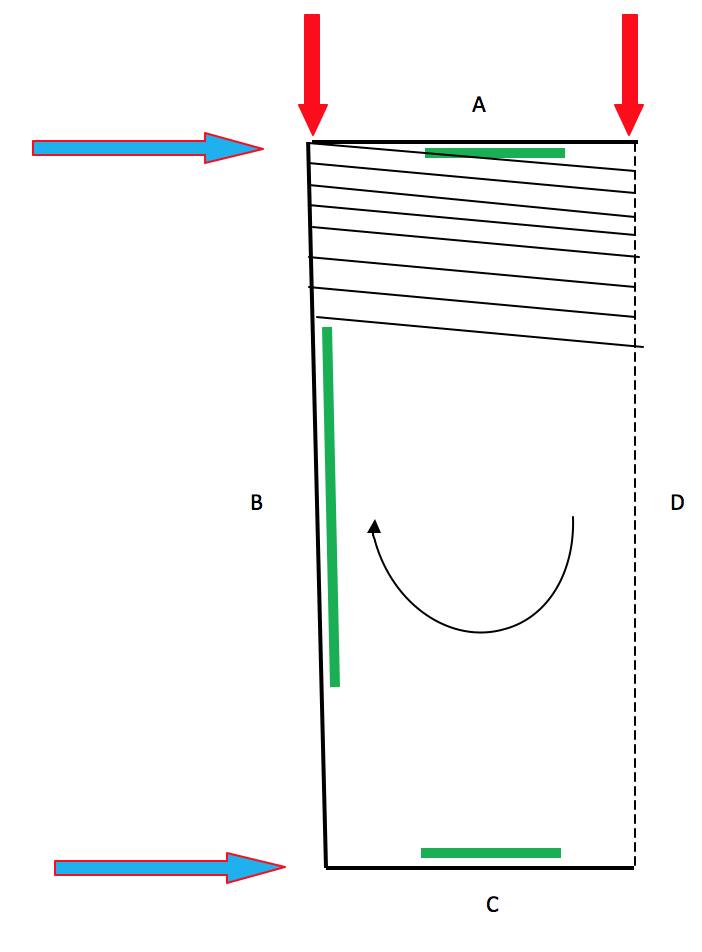 How to Retrofit with Three Foundations

The solid dark lines A, B and C represent foundations that can be attached to their respective foundations with shear walls or other hardware.  Wall line D has a dotted line because it is not possible to retrofit because of obstructions, deteriorated foundation, or has no foundation at all.

The blue arrows represent earthquake forces pushing side A and C.  This movement is resisted by shear walls or retrofit hardware.

A red arrow on the upper left is pushing down against wall line B.  This movement is resisted by Shear Wall B.

Another red arrow is pushing on wall line D, where no connection to the foundation can be made.  So what happens?

This creates a situation where the entire floor tries to twist or rotate as shown by the rotating circular black arrow.  The hatched lines represent the floor joists (the pieces of wood that support the floor you walk on) which twist as the earthquake causes the floor to rotate.  This movement is exaggerated for demonstration purposes.

This rotating action transfers practically all of the force to the opposite wall where sufficient shear walling or retrofit hardware is provided for to resist this force. This retrofit procedure is using the principle of rotation.