If you only have one or two steps leading into your front door
This video explains how you retrofit this type of home.

This 3 minute video looks at the kind of damage that can occur if you don’t retrofit your house.

This 20 minute video provides an in-depth look at the engineering principles behind these homes.  Watch the video on cripple wall retrofits first, otherwise, it won’t make much sense.

Many people choose to retrofit this type of home because they are extremely resistant to earthquake damage once they are retrofitted and put their money into a retofit rather than pay for expensive earthquake insurance.

Why is Bolting a House Important? 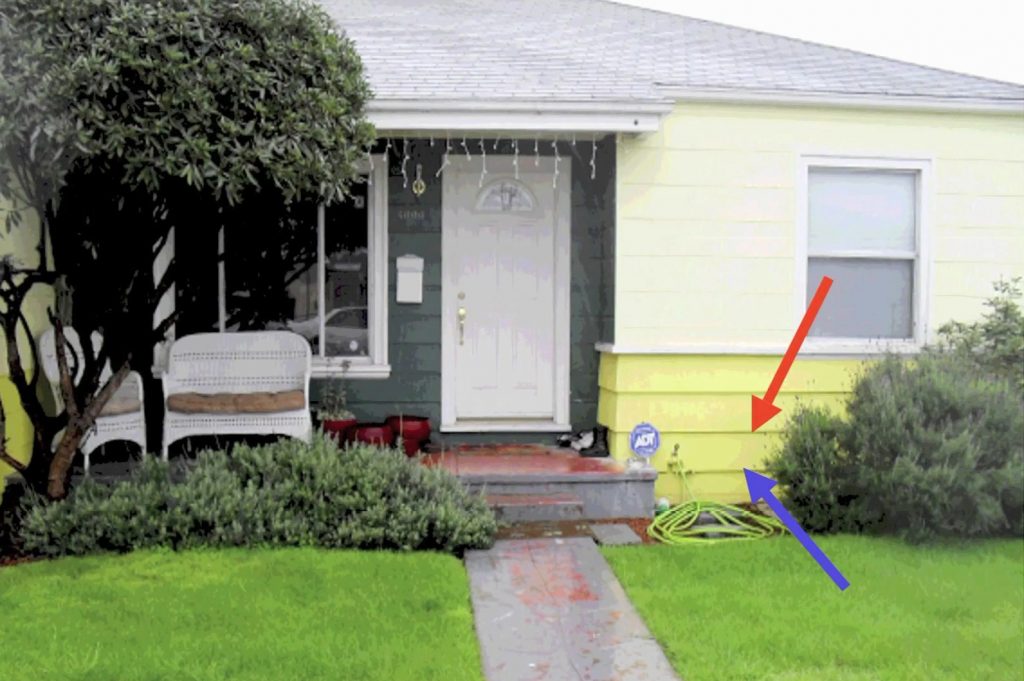 The Blue Arrow Points at the top of the Foundation, the Red Arrow at the Floor you Walk on. There is not a wall Between the two. This means you do not have a Cripple Wall 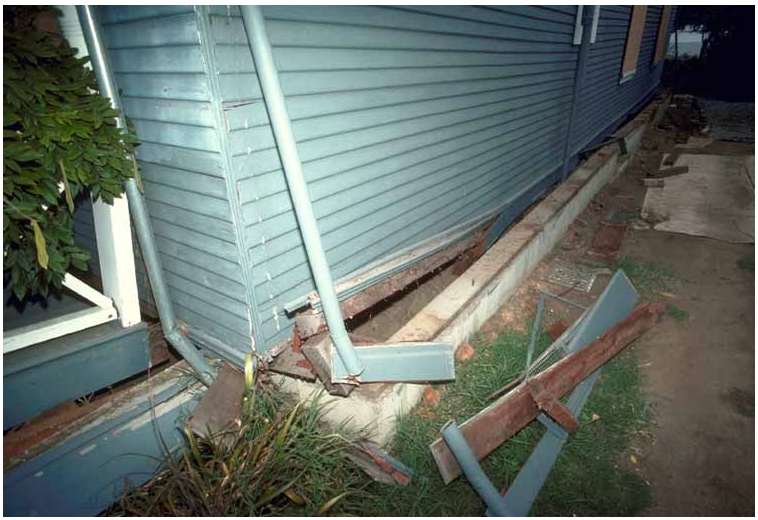 Damage to a Home without Cripple Walls

How does Bolting a House without Cripple Walls Work? 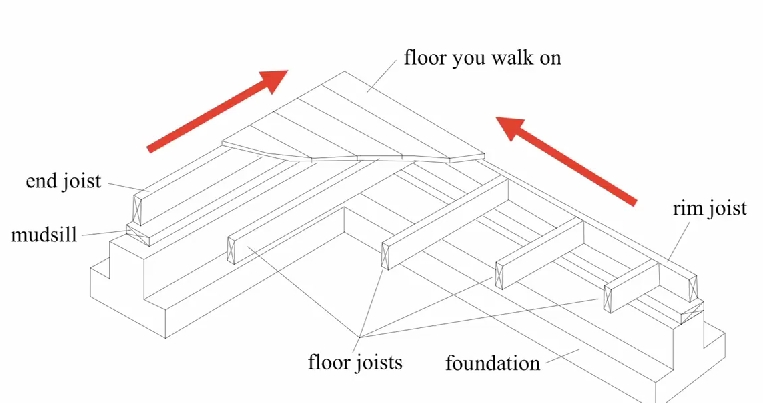 Bolting a House with Foundation Anchors 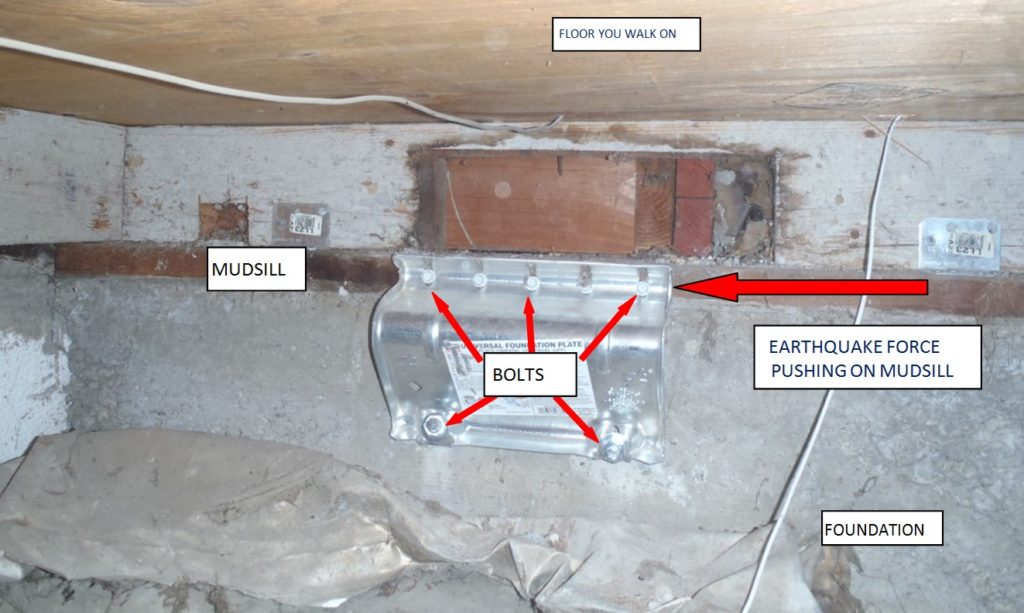 The earthquake force tries to push the mudsill off the foundation. The bolts in the Foundation Anchor prevent this from happening. We have bolted the house exactly as if we used standard foundation bolts but have done it from the side of the foundation. 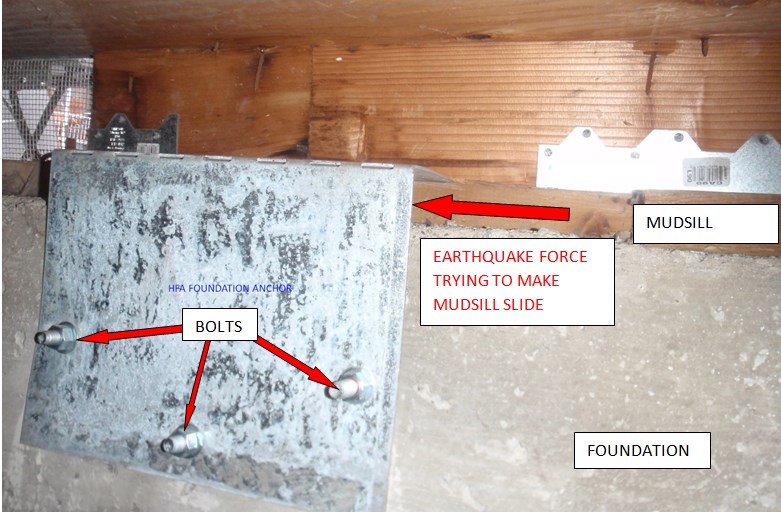 This is another kind of Foundation Anchor that is no longer made.  Bay Area Retrofit bought several hundred when the company went out of business because they are our only option. 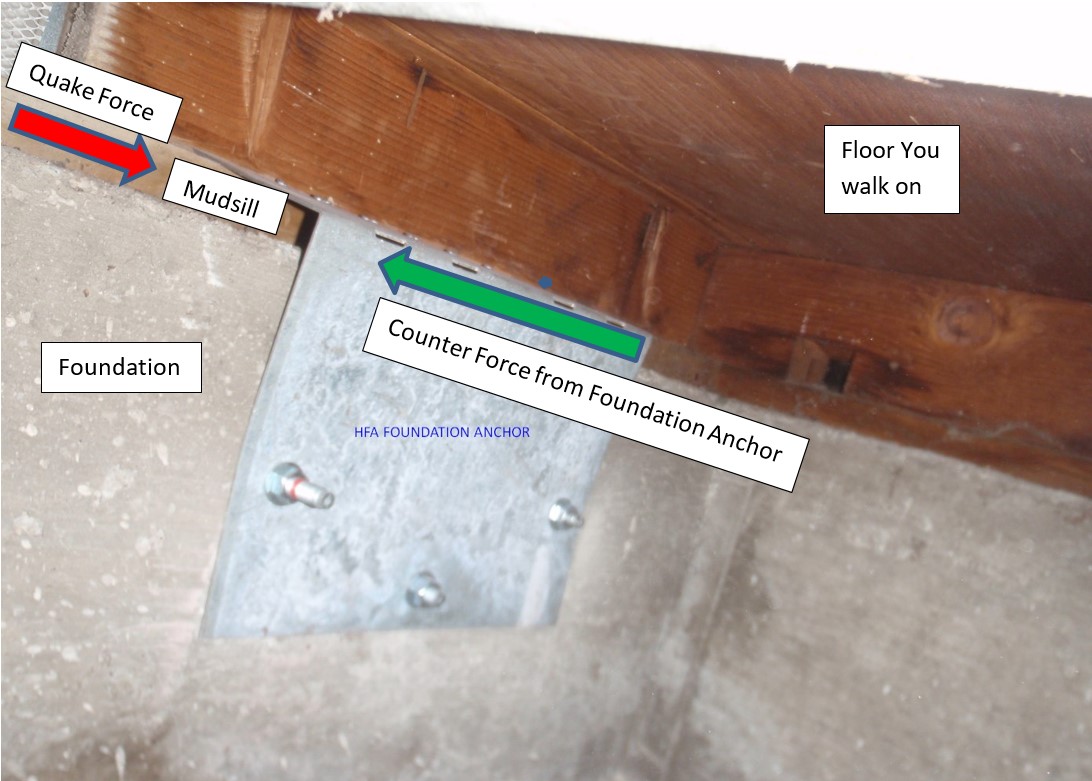 In the upper left corner, you can see how the manufacturer bent this Foundation Anchor so it can fold over and be nailed to the top of the Mudsill. 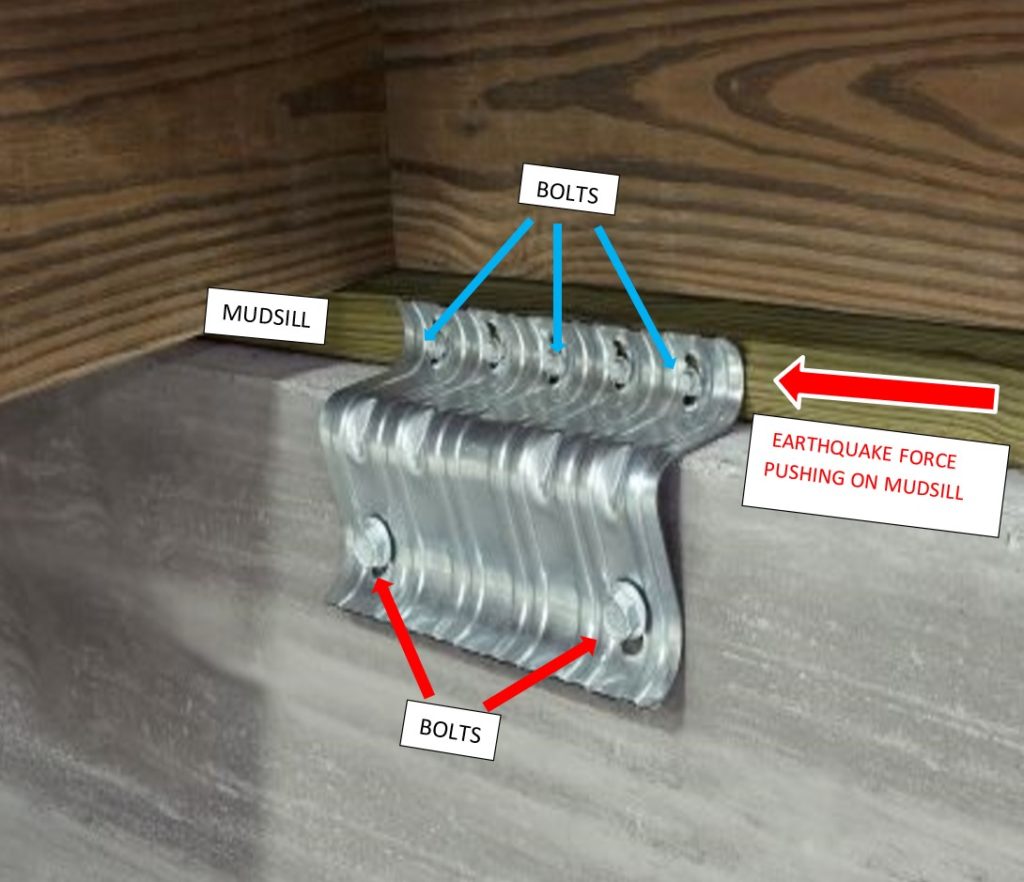 Bolting The Floor to Foundation 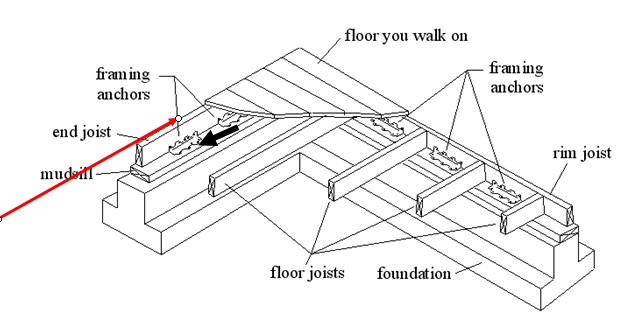 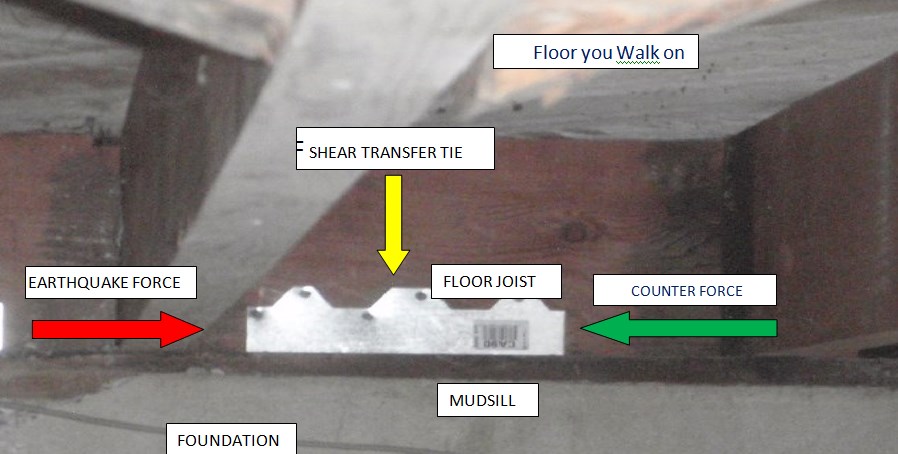 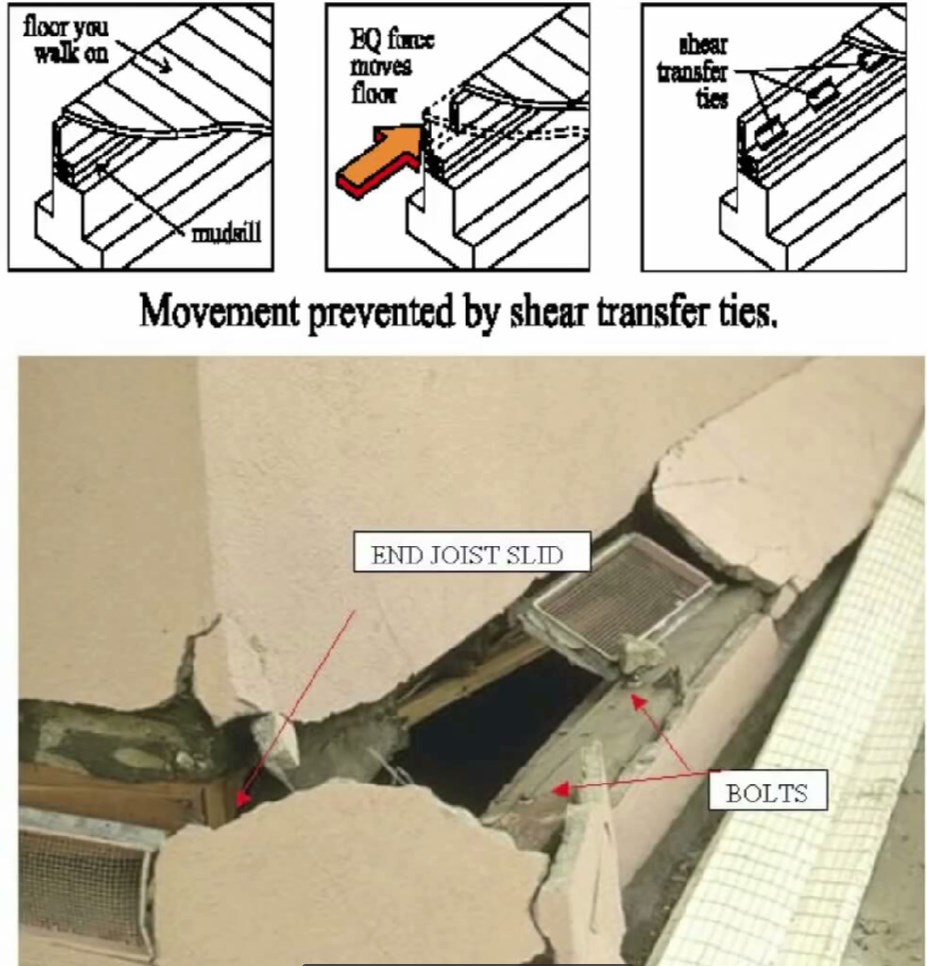 Sometimes end joists are set so close to the mudsill that it is not possible to get the hardware, a palm nailer, and one’s hand positioned in such a way that a shear transfer tie can be installed.  This shows you a possible method of doing this. 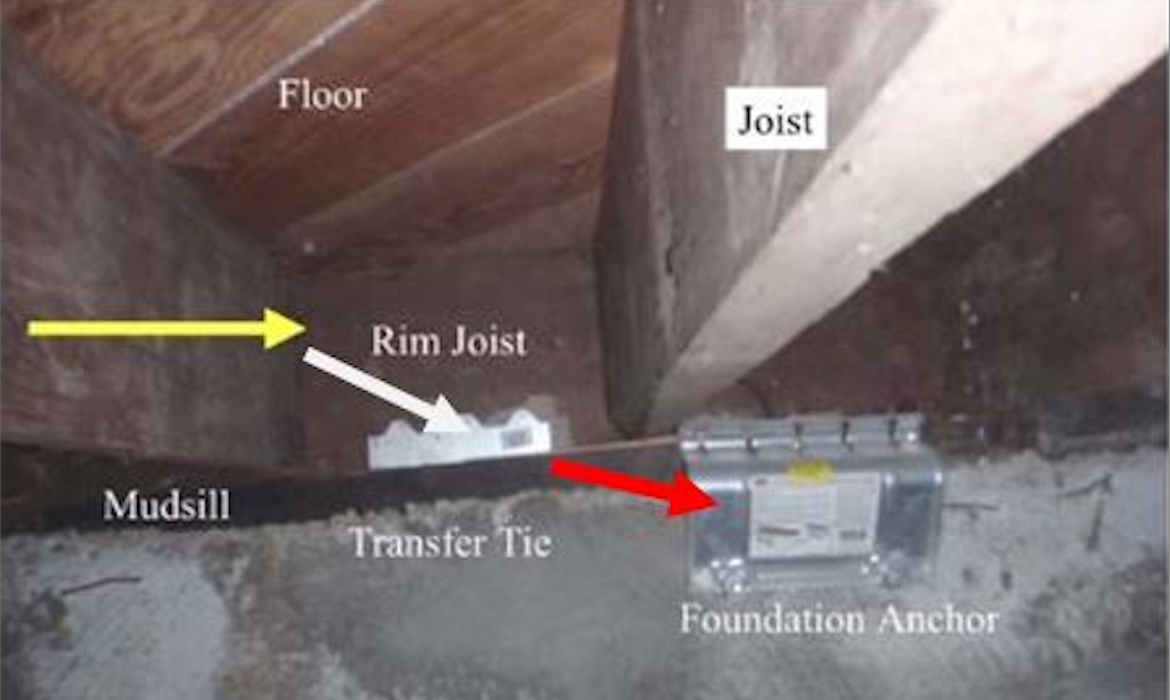 The load path is an important principle to understand. Whoever you hire should know what it is, and be able to prove to you how their retrofit plan will create a rational load path.

Bolting The House to the Side of the Foundation 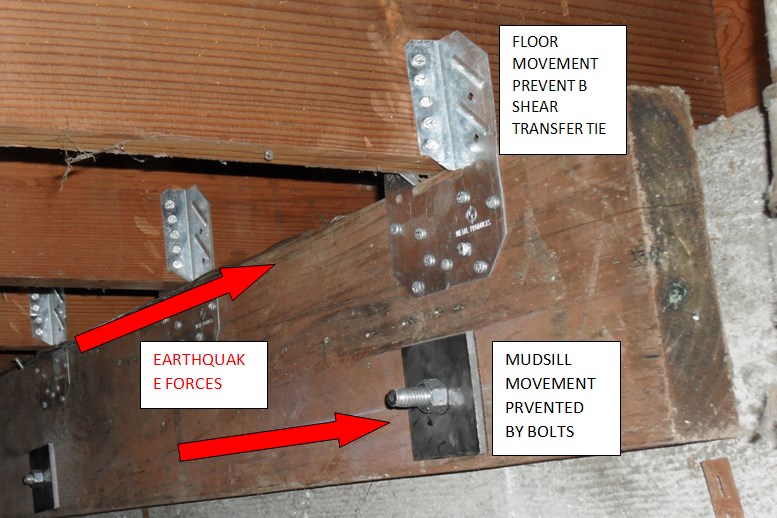 It often happens that foundation anchors and shear transfers ties will not work for various reasons. The primary cause is that a pre-made hardware for a certain circumstance does not exist. In these cases one must develop custom solutions. The most common approach is to bolt a new mudsill to the side of the foundation and attach the floor to it. 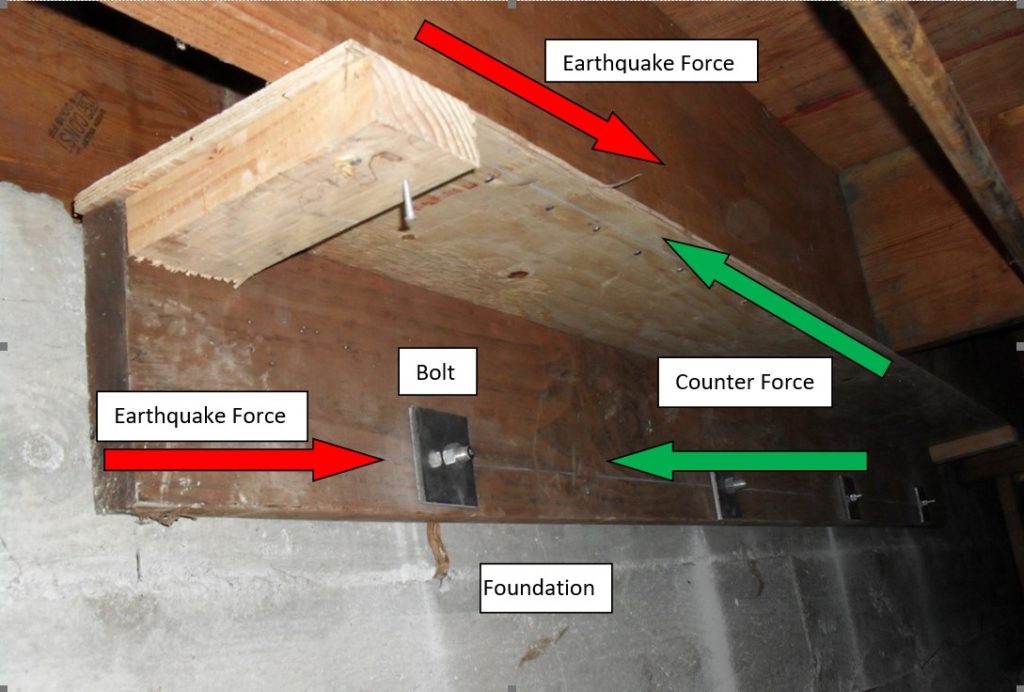 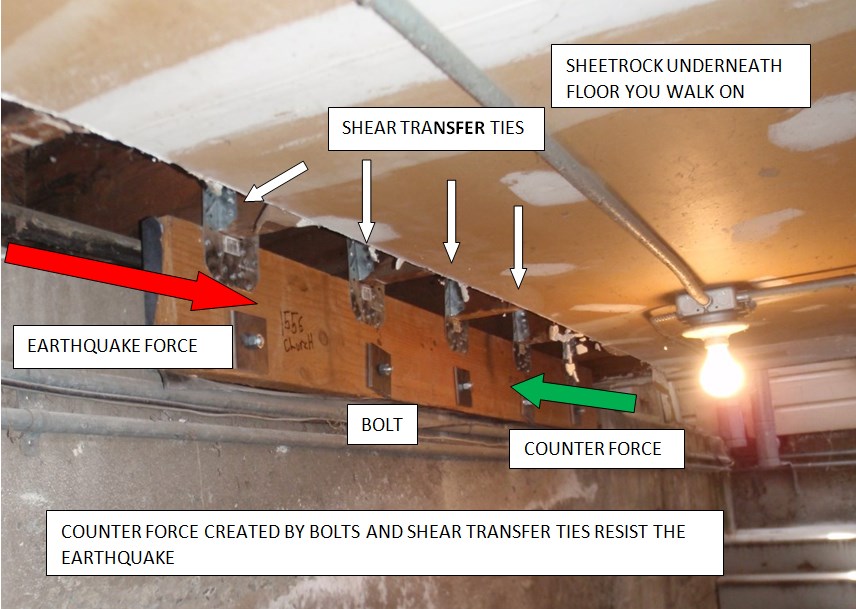 Here is a complete system with a new mudsill bolted to the side of the foundation. This along with the shear transfer ties work together to keep the floor from moving.

Too Much Hardware and You Wasted Your Money. Too Little, and the Retrofit Can Fail.

Your contractor should be able to tell you which retrofit guideline or engineering basis he plans to use and provide you with a proposed design drawing that looks something like this.  Then match the drawing to the engineering and make sure they are congruent.

Bolting a House That Is Already Bolted?

After 1958, virtually every home and addition in the Bay Area was bolted to its foundation.  Here we will take a look at bolted homes on a flat lot because they can still have big problems.

Three things can cause a bolted house on a flat lot “built to code” to be damaged. The first factor is the code. Building officials, contractors, and members of different private and government agencies write the building code.  It is an ever-changing document. Each group influence its creation, such as the powerful National Association of Builders.  This group lobbies to make construction costs as low as possible, often ignoring public safety.

A Problem with the California Building Code

See TABLE 2304.1 of the 2016 California Building Code below.  It requires 3 nails, or 3 staples toenailed to the sill. Toenailed means put in at an angle. An 8d common is a type of nail.  The mudsill is the piece of wood bolted to the foundation – see the diagram below the table.

Three nails are not enough to keep keep a floor on the bolted mudsill. It can slide off. However, before nail guns came into common use in the mid-seventies, driving nails by hand was hard on the arm and extra nailing cost the contractor money. 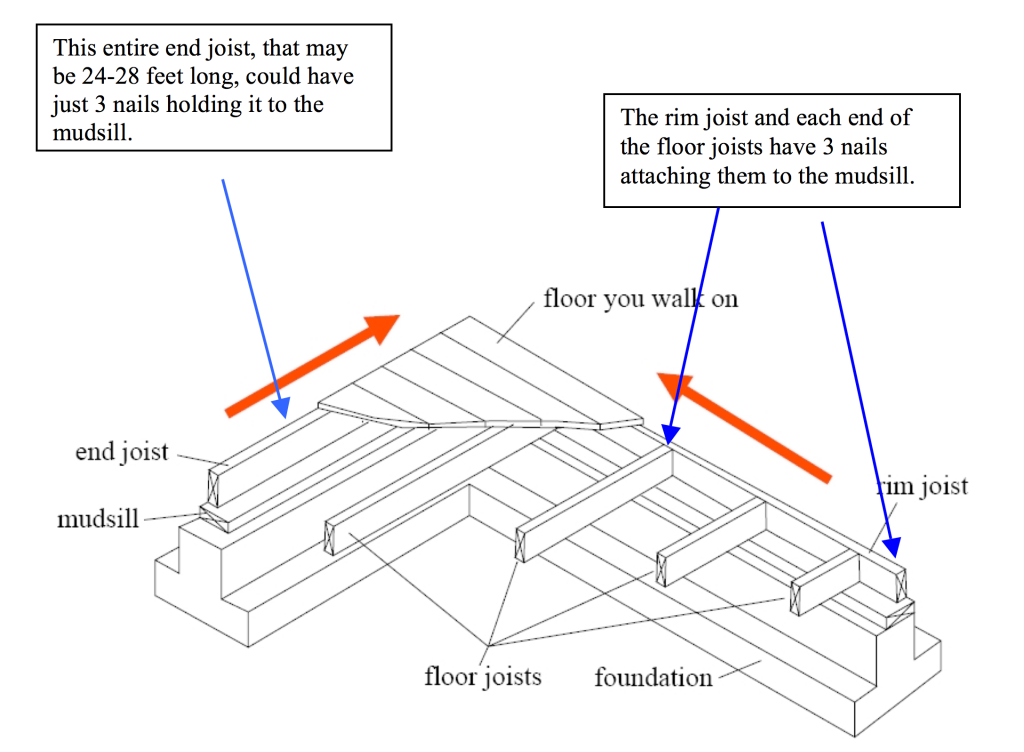 By law the contractor must follow the building code.  Code violations occur from code ignorance, from sloppy workmanship, and hurrying to save money.  The almost universal installation of bolts in over-sized holes is a case in point. 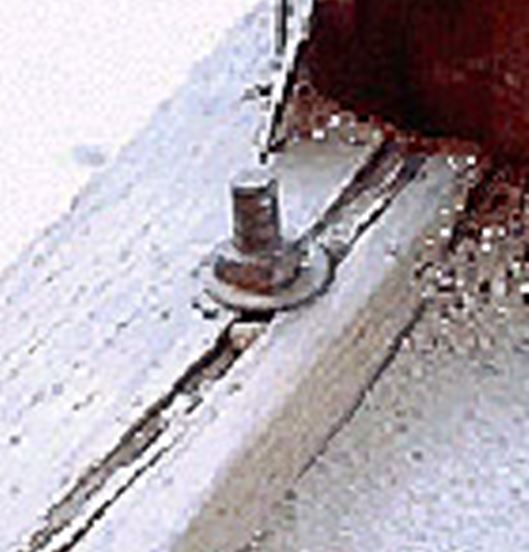 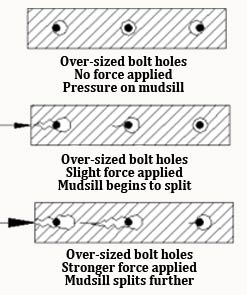 Bolts are critical but most contractors install them incorrectly. Look at this common  Building Code violation.  The building code does not give bolts in holes over 1/16 of an inch larger than the bolt any value.  This is because of splitting problems.  The code states:

Nevertheless, oversized holes are common. Building inspectors require all bolts to have to have the nuts and washers on them.  Naturally, it is impossible to inspect the sizes of the bolt holes.  So why would a contractor want to violate the building code?  So they can adjust the mudsill front to back and side to side.  Building inspectors don’t want to look at the bolts twice.

The third risk factor with a bolted house on a flat lot “built to code” is the building inspector. Their job is to make sure contractors follow all parts of the building code that relate to earthquake safety. Most time-pressed inspectors take only  a few minutes to look at a house. For this reason they often miss deviations from the building code. The near-universal presence of over-sized bolt holes, which the code forbids, is a case in point.

There are three factors that will damage a bolted home:  A deficient building code, which we can’t do much about. Ignorance of the contractor, and the oversight of the building inspector.  Just one of these factors can cause structural damage. This is why your home can still need retrofitting, even if the foundation is already bolted.

After approximately 1940, houses were no longer built with cripple walls unless they were on a slope.  This is especially true in newer cities such as the cities of San Jose, Sunnyvale, Fremont, Santa Clara, and Los Altos.  Fremont is very close to the Hayward Fault and here these retrofits are in high demand.

Is My House Bolted?

San Jose has required foundation bolting since 1927.  Fremont has required bolting since 1956.  All cities in the Bay Area since 1958.  Nor have the size and spacing of the bolts changed much.  The bolts are not a problem, the fact they have over-sized holes is.  Bolted houses with over-sized holes still benefit from a retrofit.  The house will without a doubt need shear transfer ties.  And while you are at it, might as well compensate for the over-sized holes. Ask your seismic retrofit contractor how much this kind of retrofit will cost.

Bolting a House With The California Building Code: Not a Good Idea

Earthquakes still put bolted homes at risk.  The building lacks many provisions that will protect the public.  The California Building Code has some inherent deficiencies regarding earthquake protection.  Building officials, volunteers, and representatives from different agencies and the construction industry all have input.  The latter group does what it can to keep costs down by reducing seismic safety.  Its stated purpose is to protect people’s homes, including against earthquakes.  In some ways it is successful, and in others it is not.

The building code changes constantly. It incorporates insights we gain after large earthquakes occur because of popular pressure. It also changes as a result of pressure from special interest groups.  The well-funded National Association of Builders (NAB) lobbies to make construction costs as low as possible and resists these changes.  A seismic retrofit contractor needs to understand the science without regard to flawed building codes.