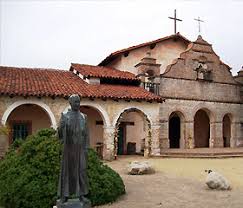 This article is an interview of structural engineer Nels Roselund and is his account of what he discovered about the mission as he designed and oversaw the construction of a very unique seismic retrofit of this priceless building.  Here you will learn about the original construction and the rehabilitation of the building. 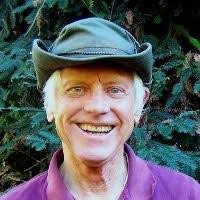 Who first contacted you about the San Miguel Mission and why?

“I was contacted by a committee at the church.  I think I got their attention because I had done a seismic retrofit on the San Juan Capistrano mission.   That was a much bigger project than San Miguel and that mission was built of stone, rather then adobe, which is what this mission is made of. They wanted someone to help them make their their church building safe in an earthquake which got a lot of damage in a 2004 earthquake. 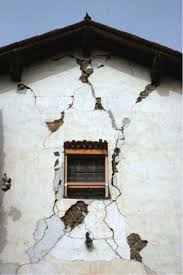 I also pointed out to them that the building is about 200 years old and many generations of people have worshiped there safely,their children have been taught there, so who am I to tell them the building is not safe. 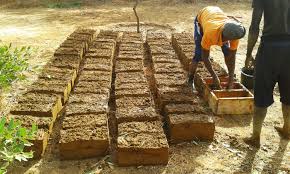 What I proposed to do is study the building inside and out from foundation to roof in order to develop a preliminary scheme for strengthening and understanding of how the building will respond in an earthquake.  After that I would tell the committee my findings.

The walls of the church are built with Adobe masonry blocks made of sun-dried soil with water and a stabilizing mixture such as cactus juice or blood.  Those blocks are made by pouring the adobe mixture into lumber forms  One way the forms might be made is with 2 by fours that are cut and nailed together to form a space maybe 3 ½ – 4 inches by 12” x 18” or something like that.  The forms are laid out on the ground and then the Adobe mixture of soil, water, and stabilizers would be poured into the forms and  left in the field to be dried by the sun. 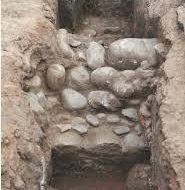 The foundations would be excavated by hand and shovel and abobe bricks would be made out of the soil dug out for the foundation.  The depth and width of the foundation would depend on the thickness and height of the walls that they were intended to support.  5 foot walls thick walls might have a 6 or 7 foot wide foundation they would be a layered construction. This involved filling the entire excavation with stones and adobe from the bottom of the ditch up to the top as shown in the photo above.  They would put in a layer of adobe mud then put a layer of stones on top of that and level it as best they could at each stage until they filled the ditch.  The adobe mud would be pourable so it would fill all the voids in the stone and act like a mortar hold the stones together.  They were trying to maintain stone on stone contact as much as possible to increase stability. 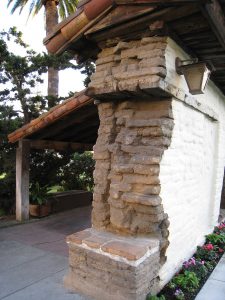 I know okay take take a look at the young were were looking at the very the broken and and that this is closest to the service to us and you’ll see that you can see the horizontalcourses and see how they were laid up for example, from the top countdown 123456 courses now to see get to take a work and take a look at the 5th and 6 course and you’ll see that there’s long long blocks and shorter blocks and there is some you’ll see that the a the long blocks were placed so that they were perpendicular to the the run of the wall and the short ones were placed so that they filled up the gap between between the outside face and the.  The longer block and the but you you can also look to see that the the the courses you see are varying widths to the left there is what looks like a single stack of Adobe’s and I don’t know why that is when I think that’s one way that they might’ve made the wall thicker after after the construction I don’t know why but the ordinarily they want to stagger the long and the short blocks way of that they built.  Can you see can you see what I was describing you okay now let’s see what I can see enough that that’s typical of all masonry if the youth laid up so that there everybody every blocker.  Every brick is has another block or brick above and below it, and the blocks are above and below have an orientation that are at 90° to the to to the blocks are considering and of that is so let’s see if we look done at the lower end of the wall where there is so short.  Looks like a short pedestal.  You can look at the young coursing and you can see that that the that the method of staggering the direction of of the blocks in the in each course so that the the what one layer helps to hold the next layer in place but there there always the the masonry is always the bricks blocks are always late, so that they have a that they have 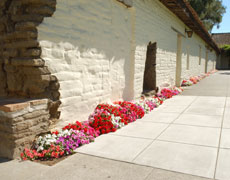 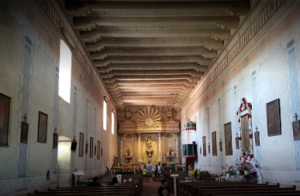 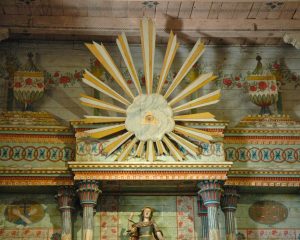 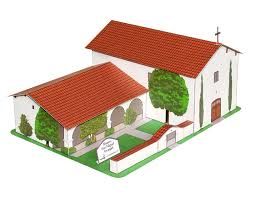 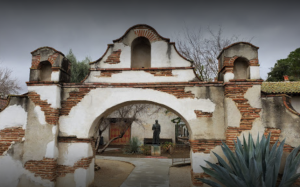 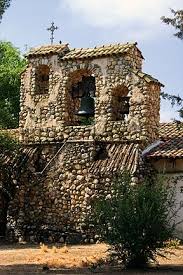 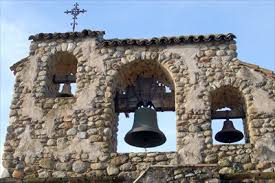 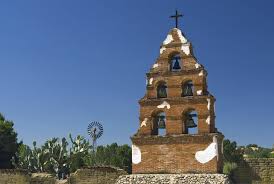 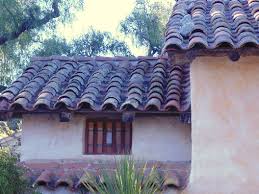 The San Juan Capistrano mission is unique in that it is the only mission made of stone.  It is no longer a functioning church because it was devastated by a large earthquake in 1812 where the walls of the Nave collapsed killing 40 people.  It was also unique in that the altar ceiling. Here is photo of the altar as it stands today.

Some of the earliest examples or mortar in California are found in the San Juan Capistrano  and San Capistrano Missions.  The former was built in 1821, and the latter 1789.   Based on a series of interviews with structural engineer Nels Roselund, who designed major seismic retrofits for both buildings, the San Miguel Mission was entirely made of sun baked clay bricks consisting of local

soil, water, and cactus juice or blood. He was not quite sure what the blood and cactus juice were for, but his hunch is that it made the soil easier to work with.It is also his belief that the bricks were made out of the soil dug out for the foundations, which were often 6-7 feet wide and 7 feet deep. Mr. Roselund believes the mortar was more or less made out of the same material as the brick, but was not sure because to his knowledge, their chemical compositions have never been tested.  The walls were made of this brick and mortar in the manner shown in the photo to the left.The mortar walls of the Nave in this mission are made of Adobe brick and mortar that stretch 45 in height 6-7 feet thick at their base.  This shows that even the weakest mortar can hold masonry together when help in a static state.

This Adobe structure is now more than 200 years old and is still a fully functional building where church services are still held.  To the left is a cross section of one of the walls that shows the Adobe bricks that were bonded together with Adobe mortar.

To the right is the Nave of the San Miguel Mission.  According to Mr. Roselund, even with its primitive mortar, the bond between the bricks is quite good.  He stated that Adobe buildings are susceptible to earthquakes, not because of the weak mortar, but because the roof and walls were not sufficiently connected to each other. 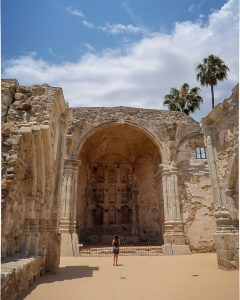 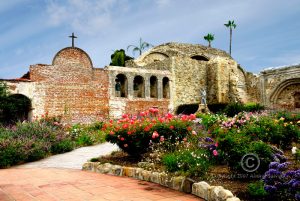 I hope this article was interesting enough for you to read it all the way to the end.  It is not easy to make something as dry as brick and mortar interesting, but I hope you have found the topic as interesting as I do.

I know this article is incomplete because the more I learned, the more I discovered how much more there is to know, but I will need to leave this important task to others.  However, I am convinced this article fills a gap in knowledge that has hitherto been a source of ignorance for most of us.  The final conclusion is disarmingly simple: if you have a brick foundation, get it tested before replacing it or retrofitting it.  That is as simple a conclusion as a 2000 word article can make it.