Homes built on a slope have foundations that are stepped and extend down the hill.  These foundations must be stepped in contour with the hill as illustrated in the drawing below so the floor can be level.  In the Northridge earthquake it was discovered that shear walls built on stepped foundations have peculiar failure characteristics that must be kept in mind. 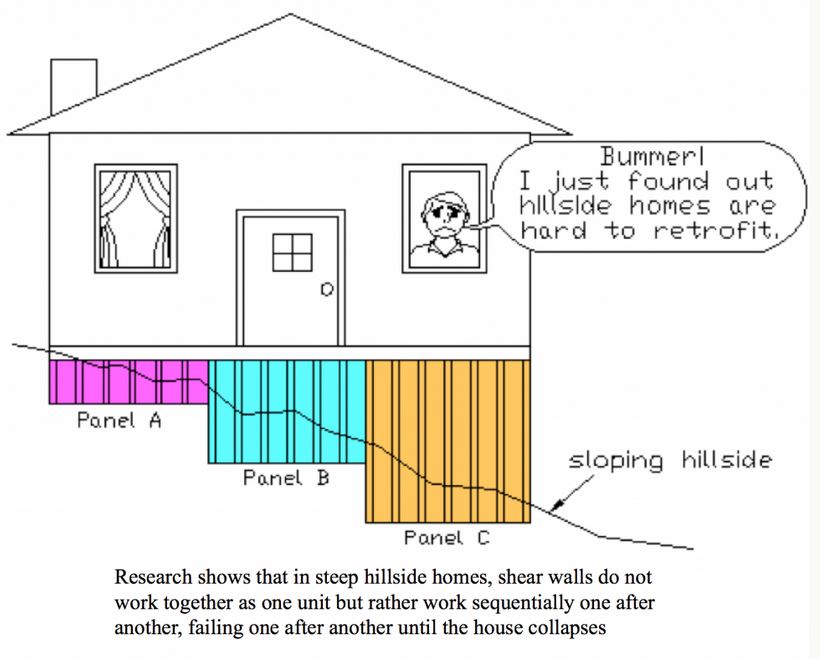 How do Shear Walls Work?

Differing heights in the shear wall crate a stiffness differential.  All things being equal in terms of nailing, the short portion of a stepped shear wall is stiffer than the taller portion.

The Effected on Stepped Shear Walls

In the drawing below, the triangle represents movement of the floor.  If the earthquake moves the floor 6 inches, the shorter shear wall segment will tear at the bolts and become worthless while the taller flexible segment will bend at the top.  Once the short shear wall fails, there will be a sequential zippering effect that causes the entire shear wall to fail. 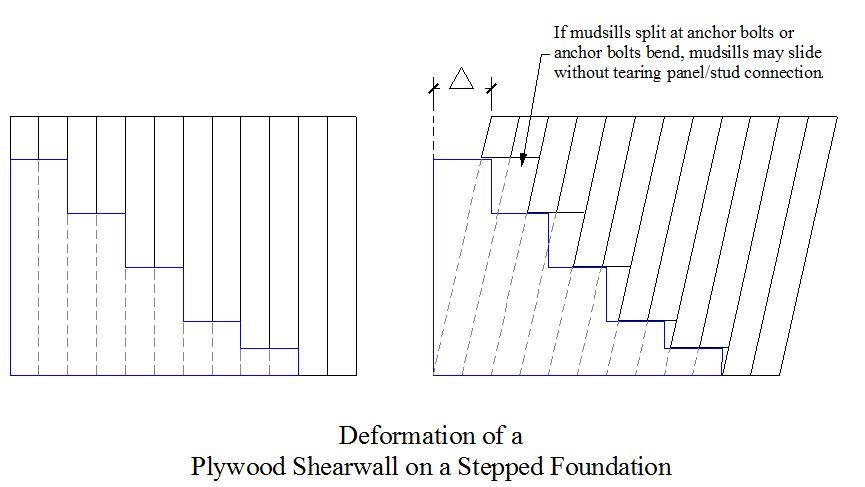 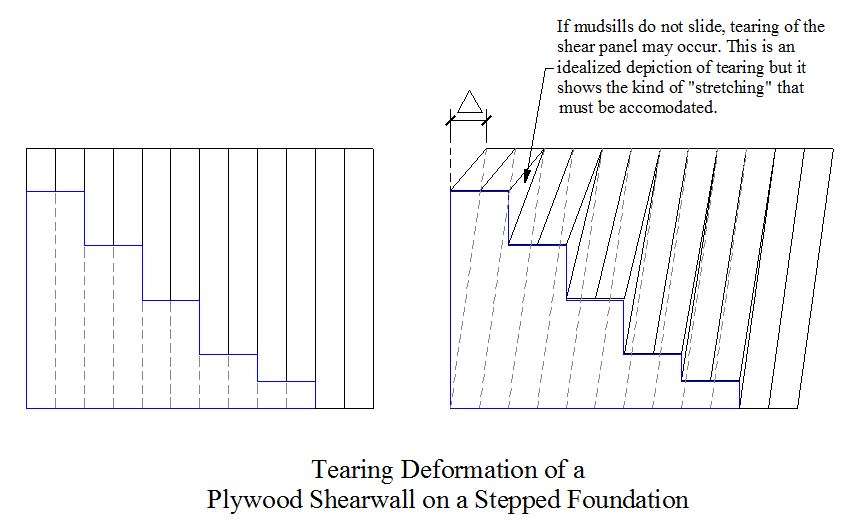 Tearing at the Shear Wall Seams

Another way these shear walls fail is by tearing the plywood at the seams.  In these cases, the base of the shear wall remains bolted to the foundation and there is no tearing at the bolt level.  However, this failure does make the entire the shear wall ineffective.

Stiffness in shear walls is also a function of nailing.  The closer the nails are spaced on the edge of the plywood, the stiffer the shear wall.  Nailing and stiffness are important factors in how much earthquake force a shear wall can resist.  If the stepped foundation is very radical, a full hillside home retrofit will be needed.  Otherwise, adjusting the nail spacing on the edges will go a long way in making up for this stiffness differential.

The closest you can put nails on the edges of plywood is 2″ apart staggered.  Staggered means you snap a chalk line on top of the plywood down the center of the 2 by 4 stud (these are real 2 by 4s, a full 2 inches by 4 inches) so you know exactly where the center of the stud is.  Then on each side of the chalk line, drive a nail 4 inches apart.  The net is a nail every two inches apart of the edge of the plywood.  Remember this is only done on the edges of the plywood. 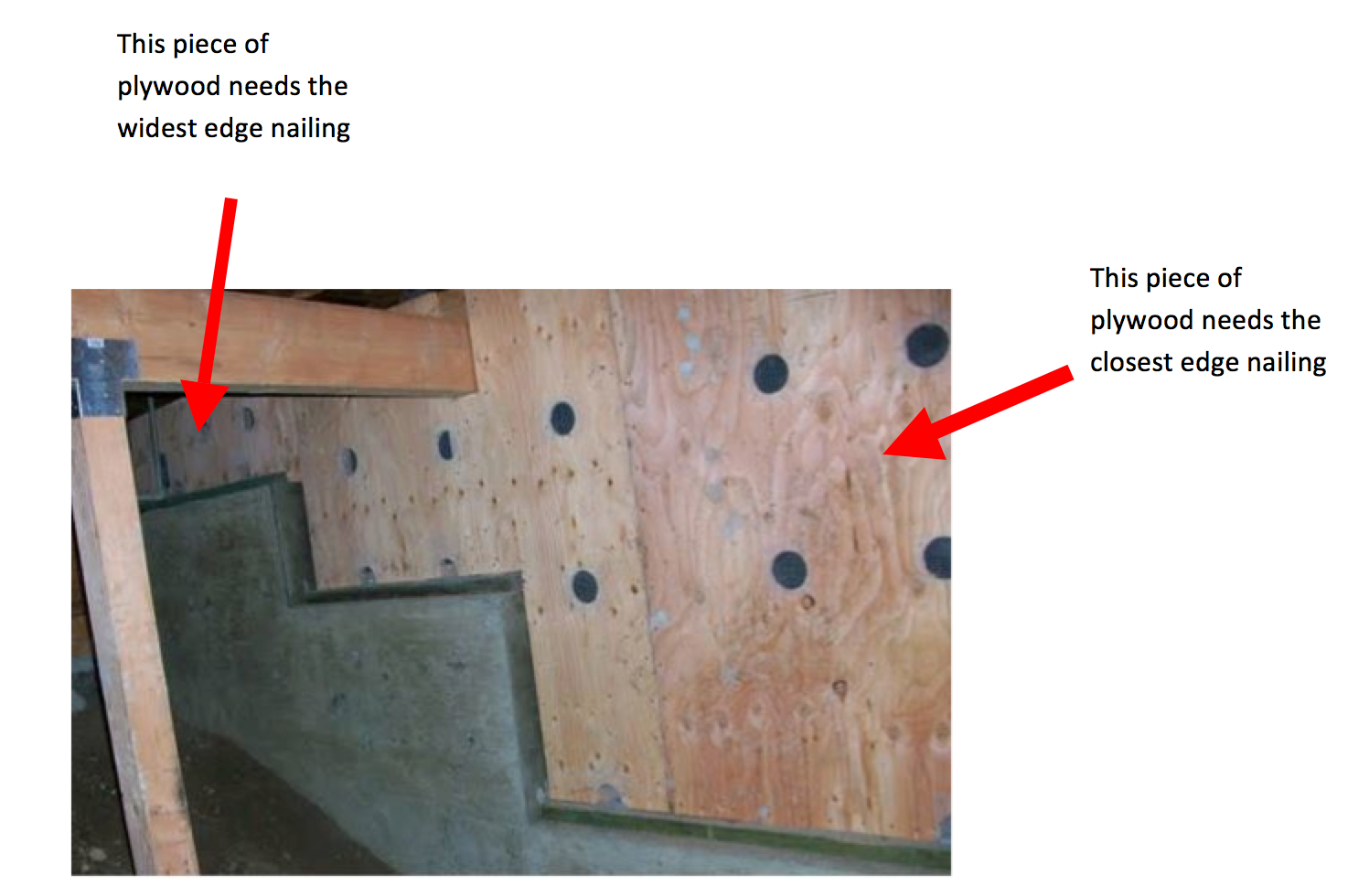 Where two pieces of plywood come together at a vertical seam, you will need to attach an additional vertical 2 by 4 to the existing 2 by 4s so each 2 by 4 has something to nail to.  For high-capacity shear walls, the building code requires 3 by studs at all seams, but it is just as good to nail two 2 by 4s together.  In the illustration below, the plywood is nailed 3 inches apart on the edges rather than 2 inches apart.  It just depends on how strong you want your shear wall.  To put it another way, as expressed by a very experienced structural engineer: 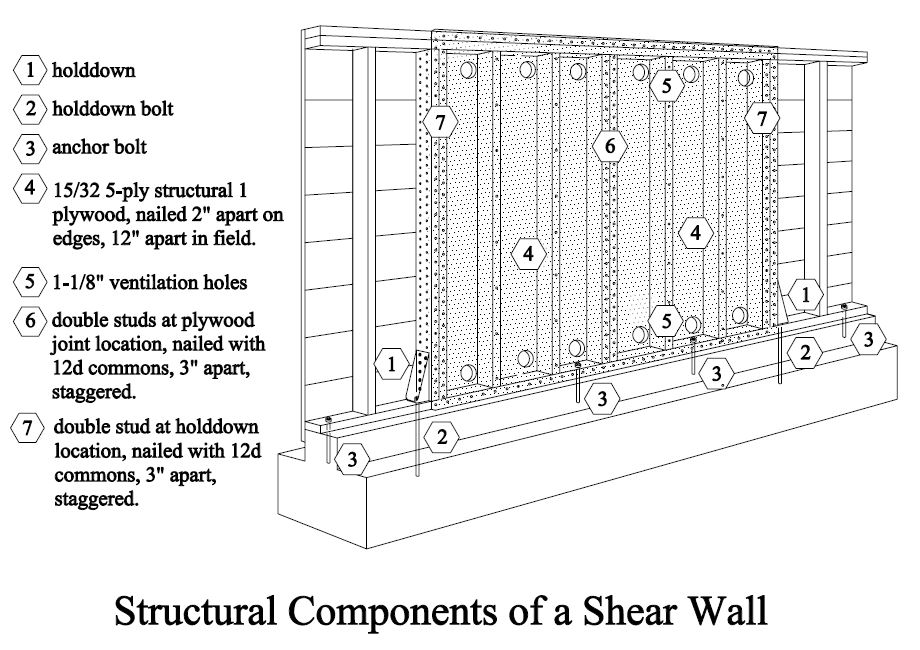 Here you can see how a conventional shear wall is built.  When shear walls are built on a stepped foundation the framing is different.

The procedure best used with shear walls built on stepped foundations is as follows:

1)  Nail the edges of the tallest shear wall segment 1.5″ apart.  This makes the tall segment as stiff as possible.

3) Divide by the shortest wall

4)  The result is our allowed distance between nails on the edges of the plywood.

The tightest we can nail the edges on the tall wall is a nail every 1.5″.

Shorter 42” wall should have 3” nailing on all edges.