Retrofitting Posts is a Waste of Money

This what it looks like under your house.  The bottom of the posts are sitting on concrete piers and the tops of the posts hold up beams, also known as girders.  Floor joists rest on top of the girders and the floor you walk on sits on top of the joists. The building code makes no distinction between posts that are 2 feet tall or 10 feet tall and only requires one nail be used to attach the bottom of the post to the concrete block and NOTHING (such as pier caps) is required to attach the top of the post to the girder.  There is an extremely common and costly misconception that these post connections be strengthened.  The rest of this article proves why this procedure is a waste of money. 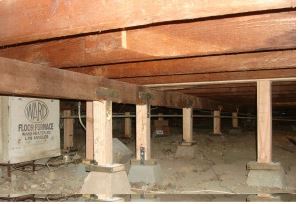 As shown below, sometimes the posts support beams that the floor is nailed to and there are no joists. 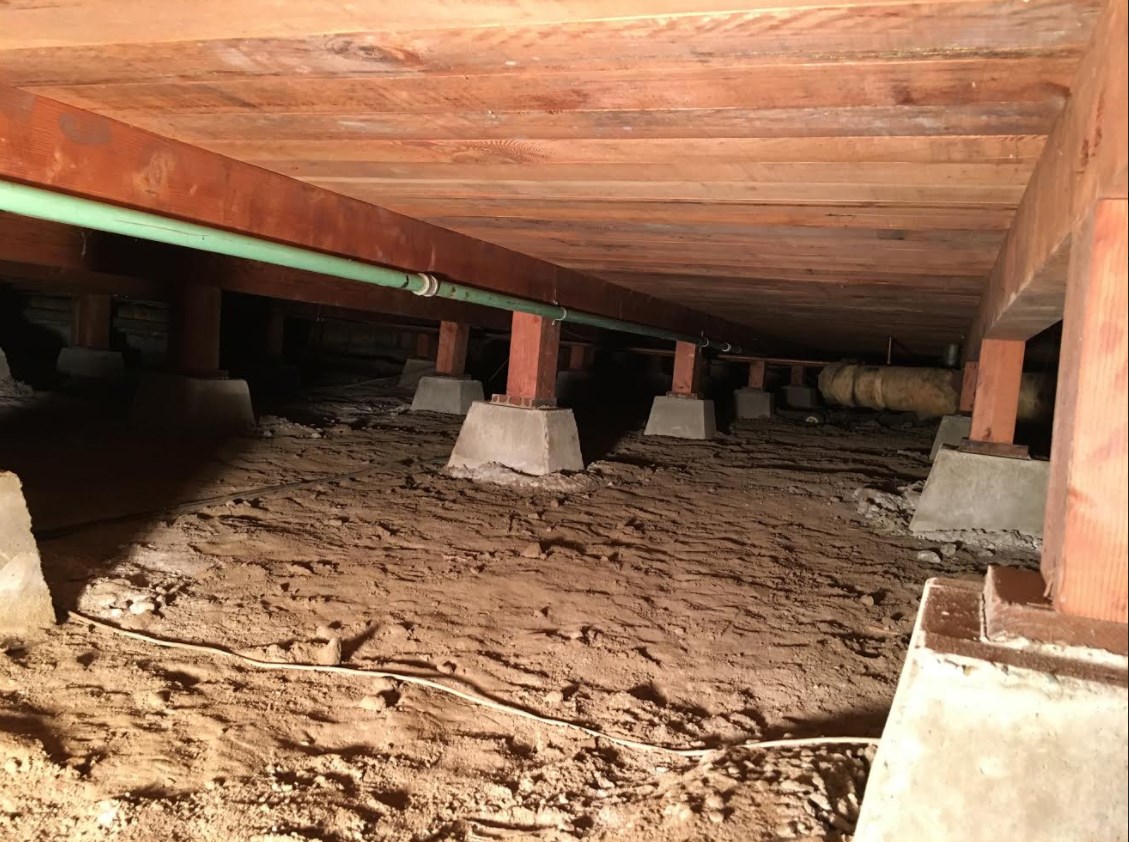 THESE POSTS IN THE CRAWL SPACE HOLD UP THE CENTER OF THE FLOOR WHILE THE PERIMETER FOUNDATION HOLDS UP THE OUTSIDE EDGES. THE BUILDING CODE DOES NOT REQUIRE ANYTHING SPECIAL BE DONE WITH THESE POSTS.

Below are photos of some metal post connectors.  Our first alert something might be wrong here is that this is not recommended by any seismic retrofit codes and guidelines. 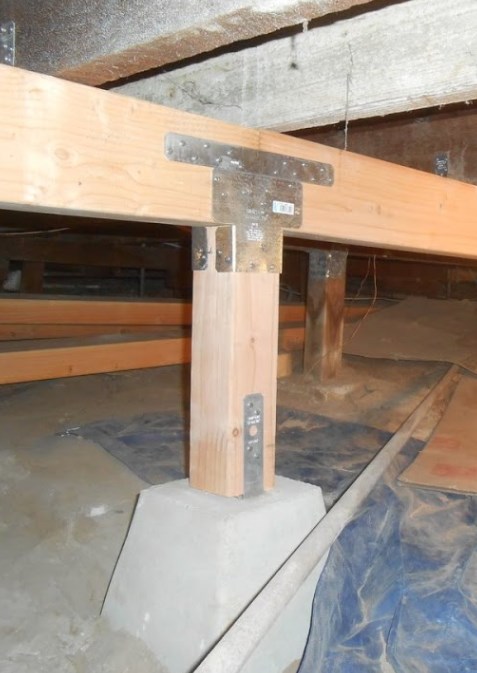 STEEL CONNECTORS ATTACHING THE TOP OF A POST TO A BEAM THAT SUPPORTS THE FLOOR AND THE BOTTOM OF THE POST TO A CONCRETE BLOCK. 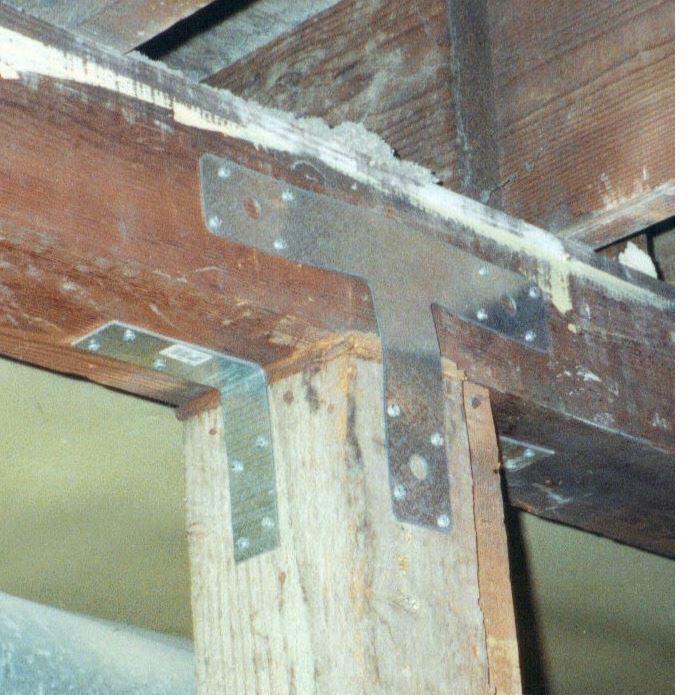 A DIFFERENT TYPE OF CONNECTOR KNOWN AS A “T” STRAP ATTACHING THE TOP OF A POST TO A BEAM. 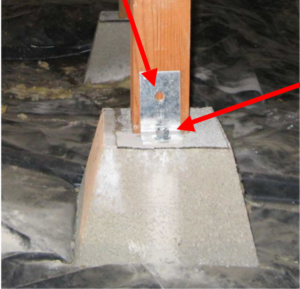 LOWER ARROW POINTS TO A BOLT THAT ATTACHES THE STEEL CONNECTOR TO THE CONCRETE BLOCK. 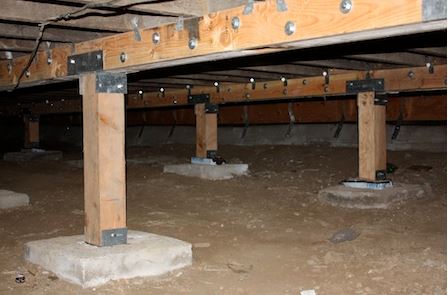 A TYPICAL HOME WHERE THE CONTRACTOR OR ENGINEER BELIEVED POST CONNECTORS WERE IMPORTANT.

What Does the Building Code Say? 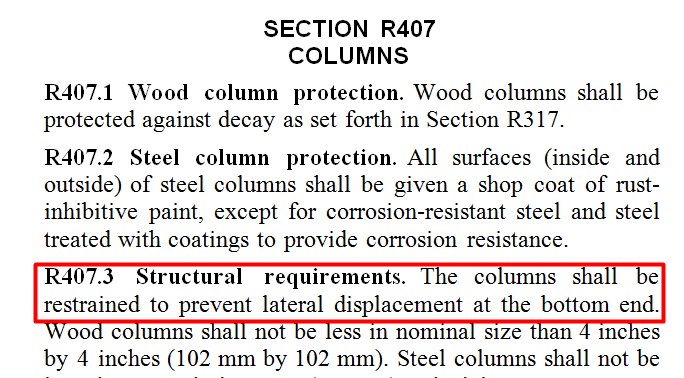 THIS BUILDING CODE CITATION REQUIRES ONLY ONE OR TWO NAILS TO ATTACH THE BOTTOM OF THE POSTS (“COLUMNS”) TO THE CONCRETE PIER BLOCK. EXISTING HOUSES HAVE WOOD EMBEDDED INTO THE TOP OF THE CONCRETE BLOCKS.

The purpose of this requirement is clearly stated in the International Residential Code.

Quoting directly from the IRC R407.3 commentary: “To minimize the chance of accidentally displacing columns supporting beams or girders, a means of mechanically anchoring a column is required.”  The IRC R407.3 requirement is literally about providing a minimal connection so you can’t elbow or hip-check a column off its footing or dislodge it by running into it carrying a heavy box.

Here are three examples of drawings given to contractors to show what the engineer wants to be done to this unimportant connection.  In the drawing to the left, the red box contains the steel “T” strap post connector we showed you earlier.  The blue box shows the post to block connection.  The arrows point at the hardware and bolts connecting the post to the concrete block. The image to the right from a different engineer shows the exact same thing.

The drawing at the bottom requires a new steel-reinforced concrete foundation. It is buried in the ground and is 18″ wide and 18″ deep.  It also has two types of steel connectors at the top of the post and one steel connector at the bottom.  This contraption is so complex it would probably cost $1200 or more to build. 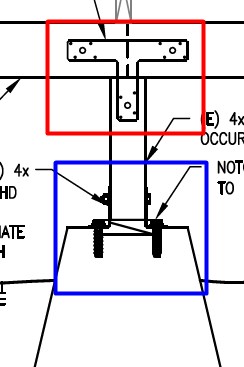 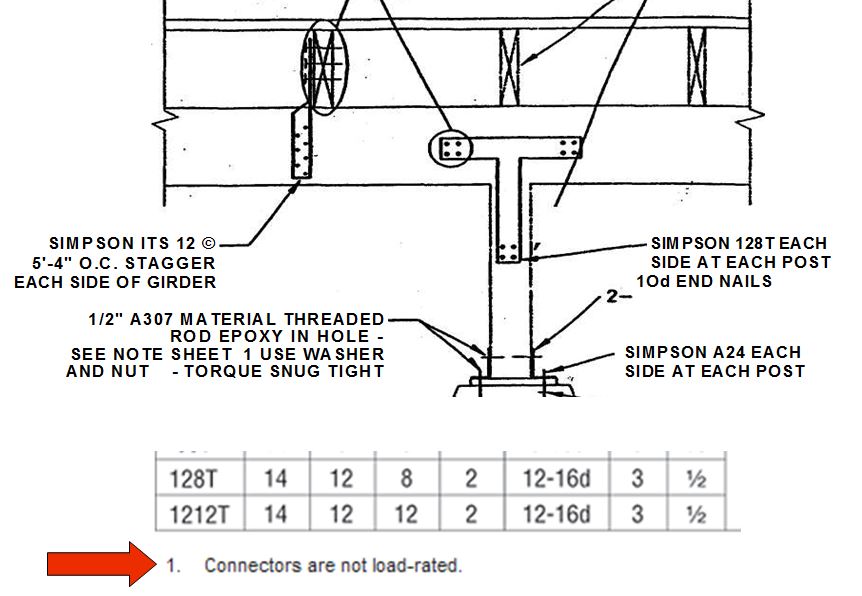 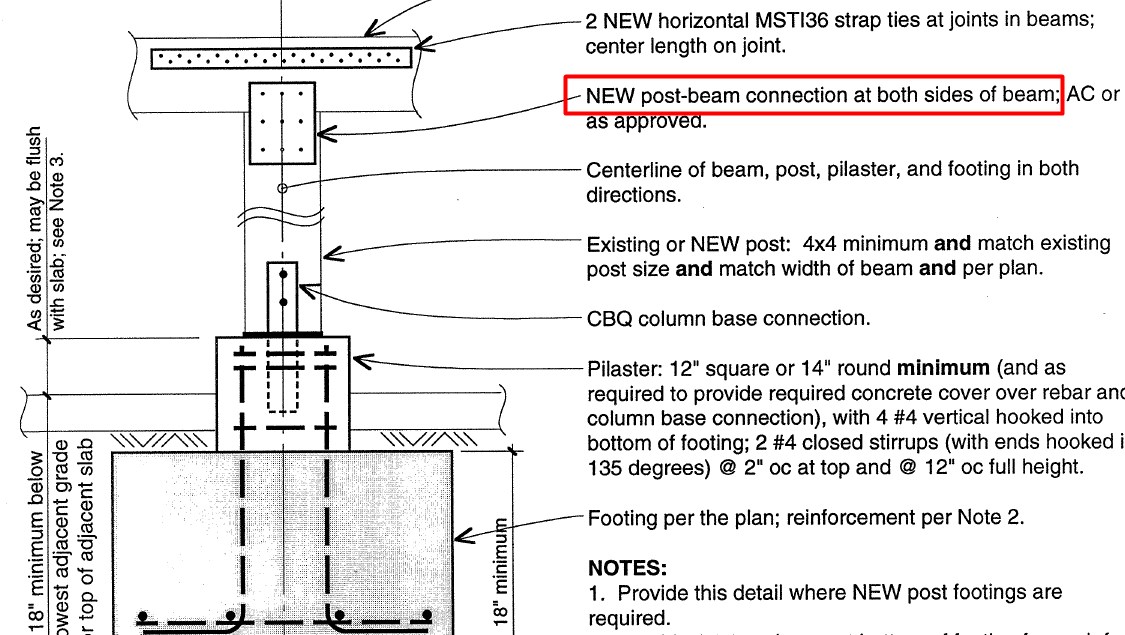