Hillside Home Retrofits can Save Your Life

Hillside Home Retrofits Can Save Your Life

Contractors built homes on steep hillsides in Oakland, Berkeley, and parts of El Cerrito when land on flat lots was no longer available.  For the this reason, contractors built many homes on steep lots in San Francisco.  The structural deficiencies inherent in hillside homes caused numerous casualties in addition to catastrophic losses of property in the Northridge earthquake. The photos below, and the video above, show what happened to hillside homes in the Northridge earthquake.  They clearly point out why hillside home retrofits are so necessary.  A hillside retrofit might save your life.

Bay Area Retrofit was fortunate enough to have received training in hillside home retrofits from structural engineer Nels Roselund who is a co-author of this report on retrofitting hillside homes. 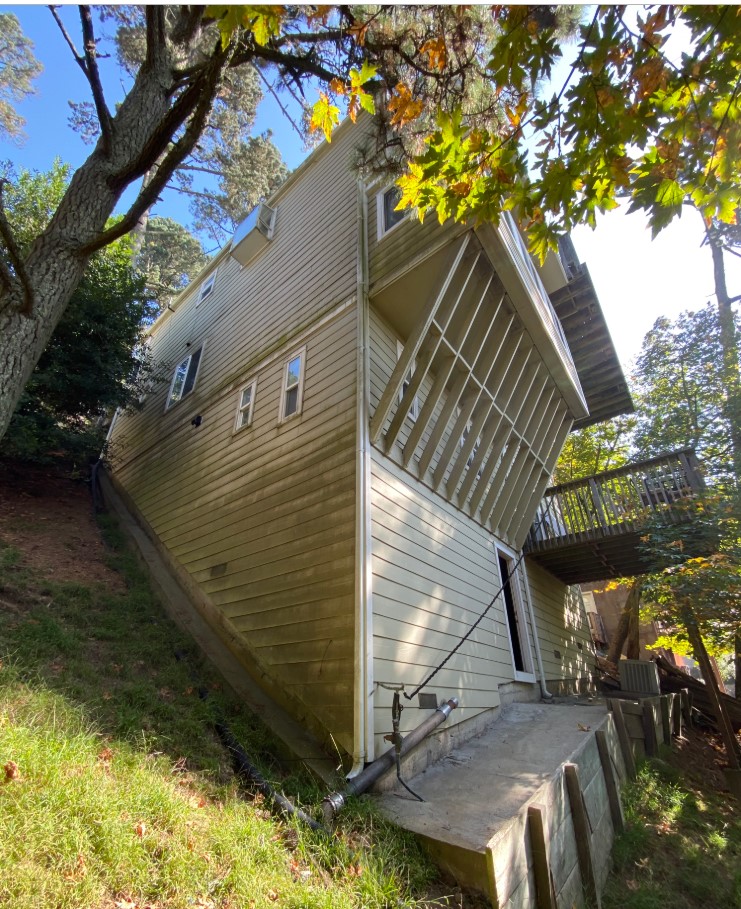 In response to this tragedy, the City of Los Angeles developed the Los Angles Hillside Code for hillside home retrofits. This code does not rely on plywood shear walls to protect these homes. Unfortunately, the California Building Code still relies on retrofit standards that use plywood in spite of the fact these houses will collapse. Meanwhile, the clock is ticking on the Hayward Fault. 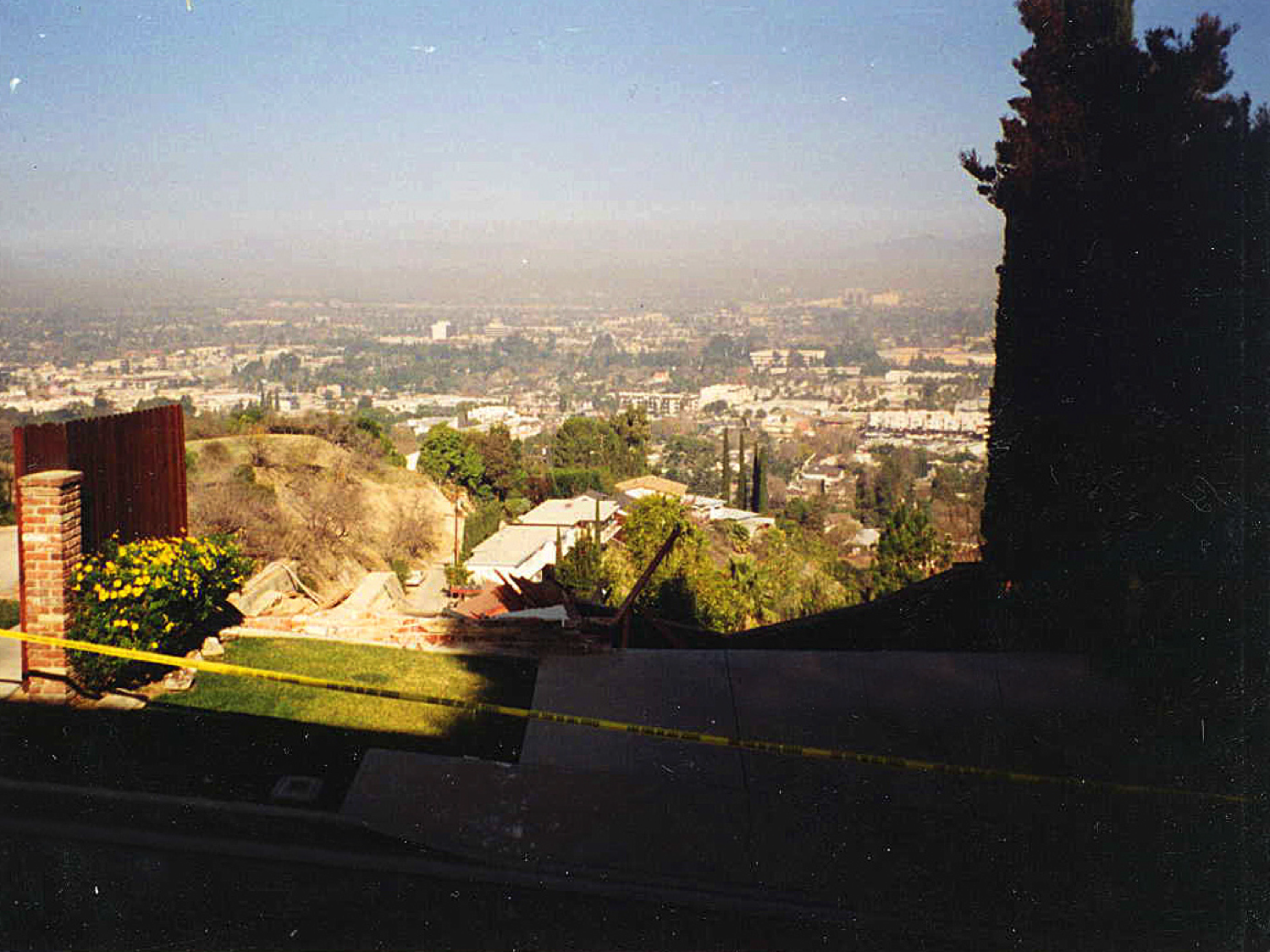 Here is a photograph that shows why people love hillside homes; the views can be spectacular. Notice the police tape going across the photo. In the photo below you see what lies down the hill. You can see a cement slab leading into a cliff that once was a driveway. 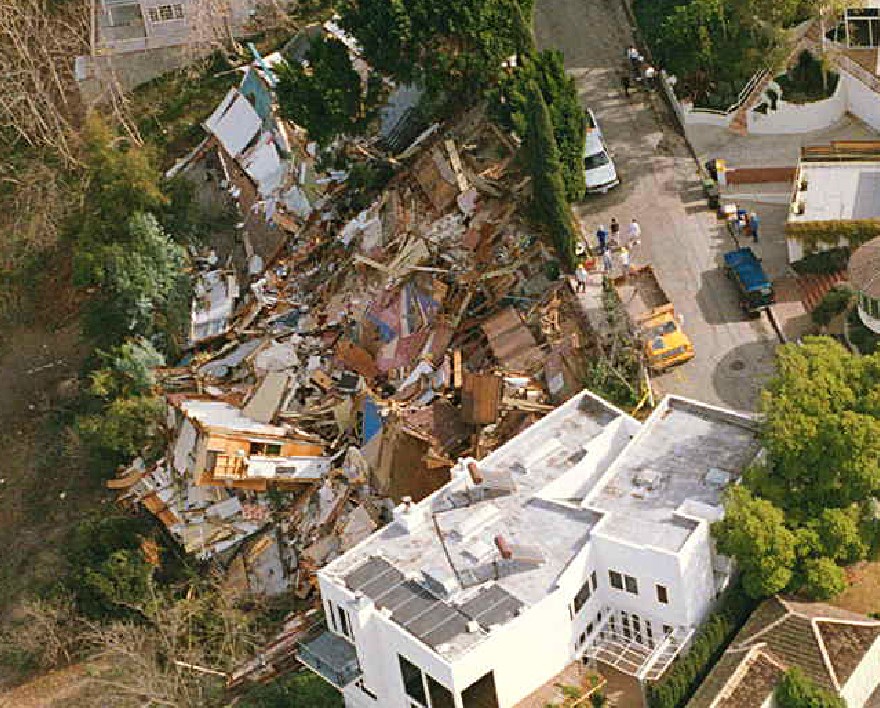 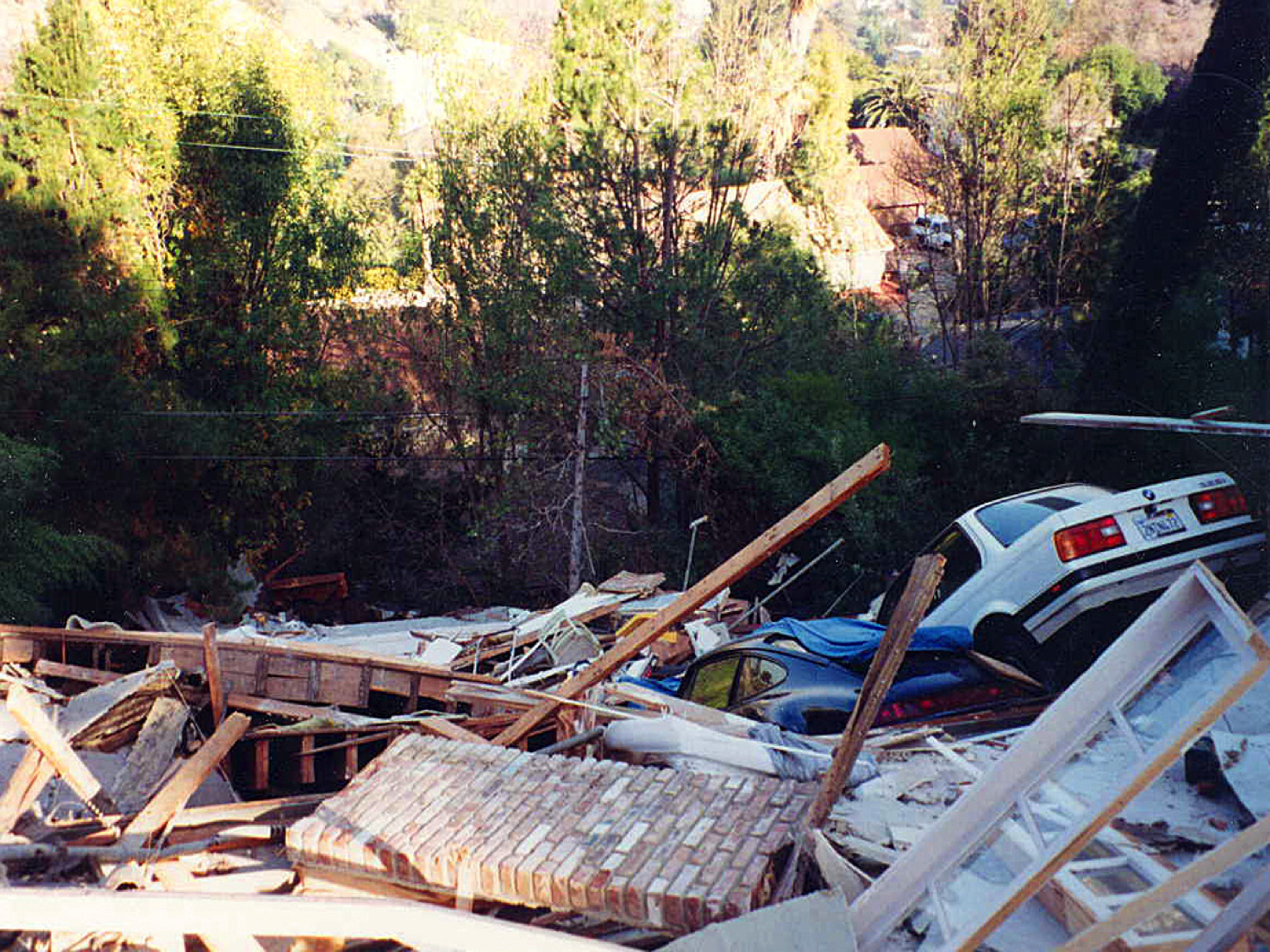 Why do Hillside Homes Kill People?

The Northridge earthquake completely destroyed this house while other homes around it withstood the earthquake.  Why?  The answer to that question was the focus of an extensive engineering study.  This study was conducted by a Los Angeles Department of Building and Safety and the Structural Engineers Association of Southern California. Their findings contradicted what they believed about shear wall bracing.  Shear wall bracing is not allowed  in Los Angeles, but it is still allowed in the Bay Area. 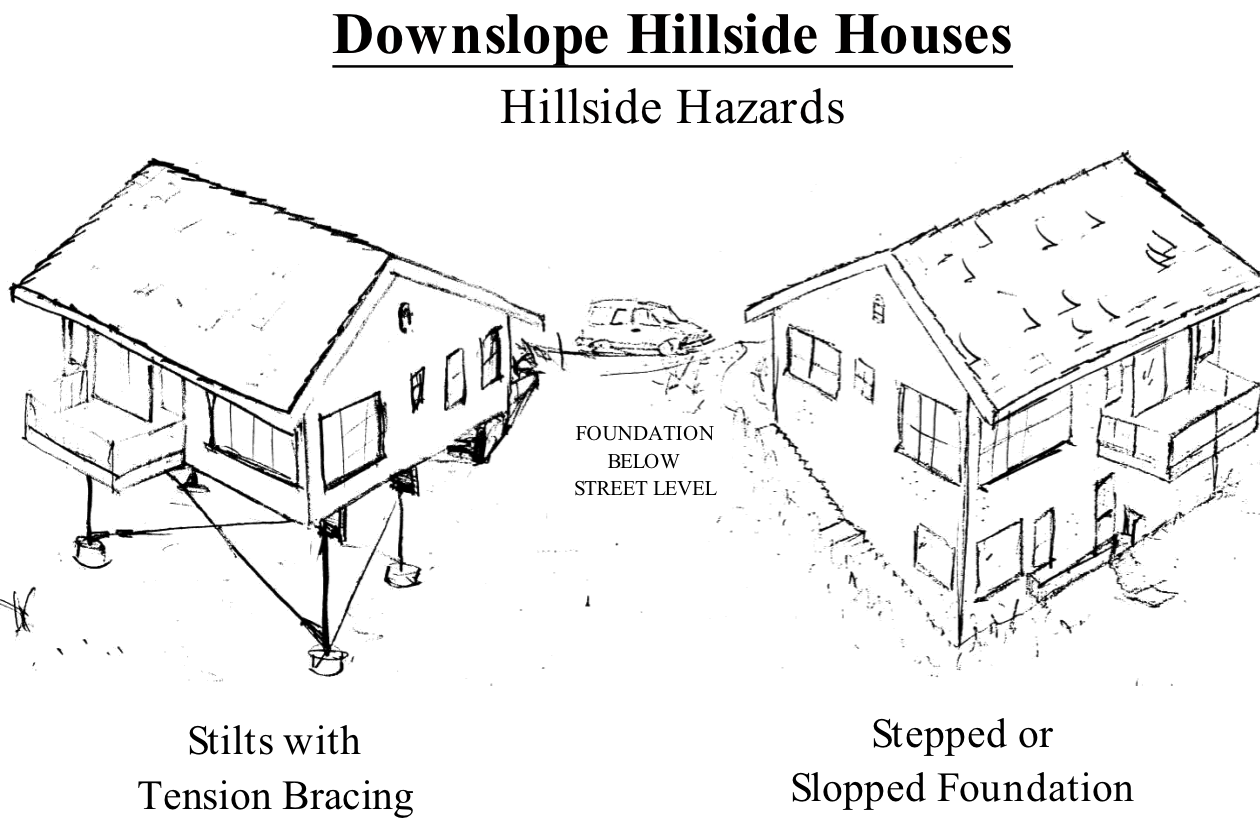 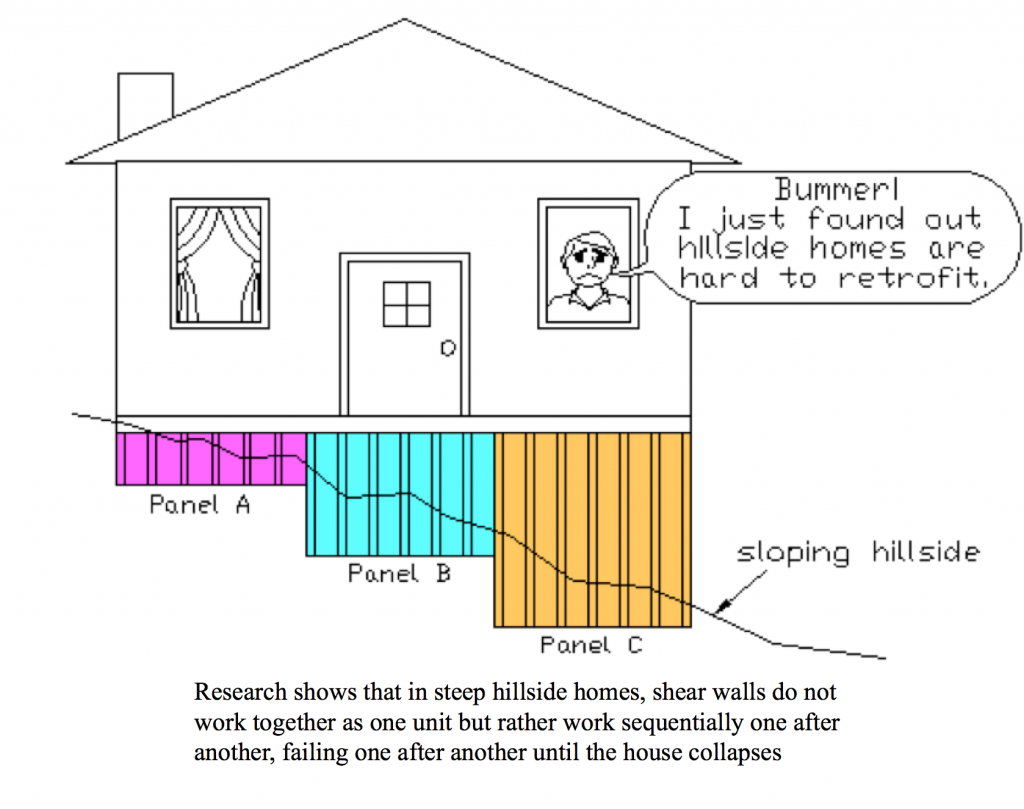 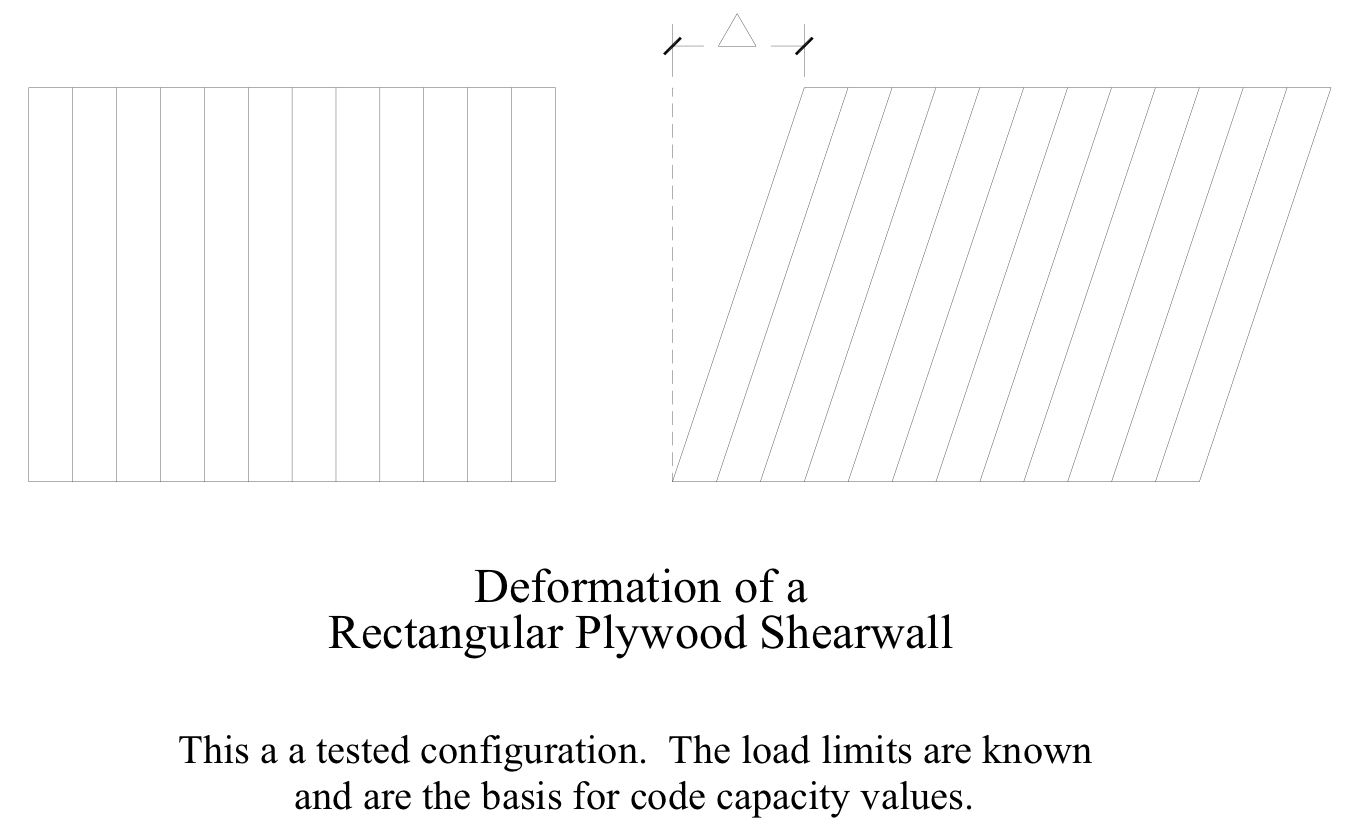 Why Plywood On Hillside Homes Reacts Differently From Most Homes

These two illustrations represent a standard rectangular shear wall on a standard horizontal foundation. You can envision the vertical lines of the drawing on the left side as being the 2×4 studs of a wall that have a sheet of plywood nailed to them. The drawing on the right shows how the 2 x 4 studs and shear wall deform when earthquake forces hit it. The little triangle thing represents “delta”, an engineering term that indicates the amount of deformation that takes place. NOTE: This standard rectangular shear wall configuration has been tested by engineers and the load limits of it are known and understood. The building code strength values for shear walls are based on this rectangular configuration. 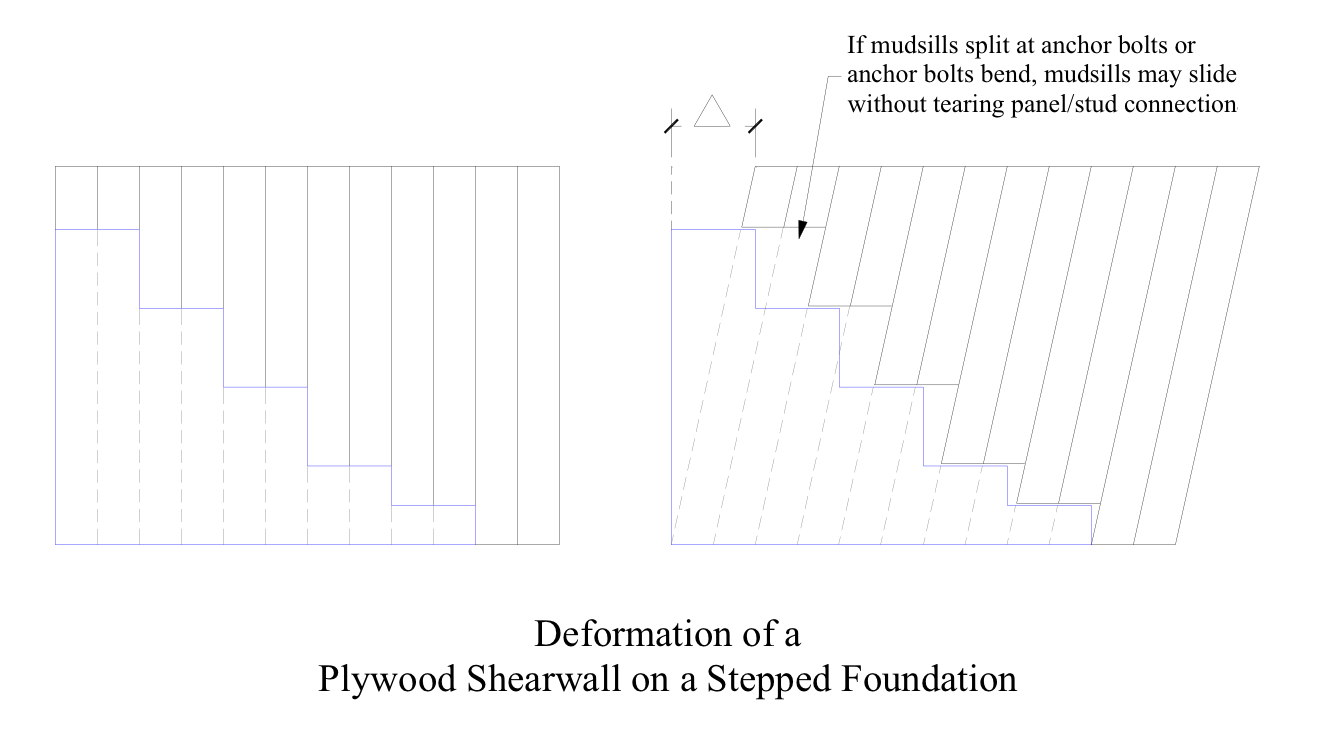 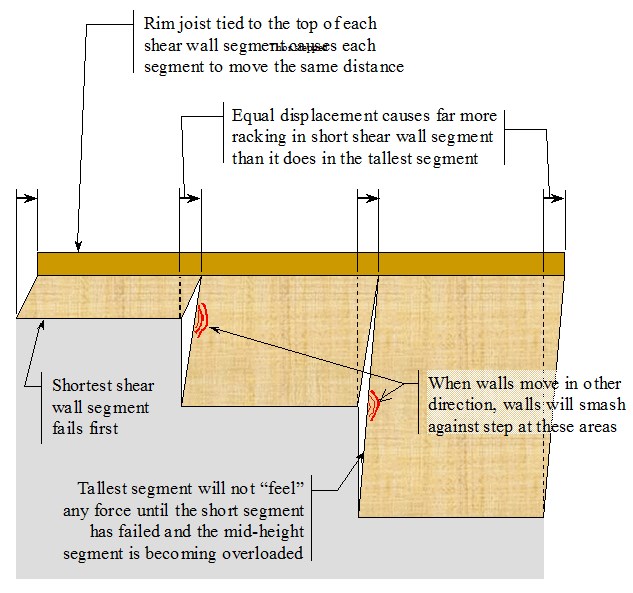 In the above diagram, the mudsill stayed attached to the foundation but the top of the shear wall moved, resulting in tearing of the plywood panel at the foundation attachment. This is an idealized depiction of tearing, but it shows the kind of “stretching” that the shear wall is subjected to during an earthquake. 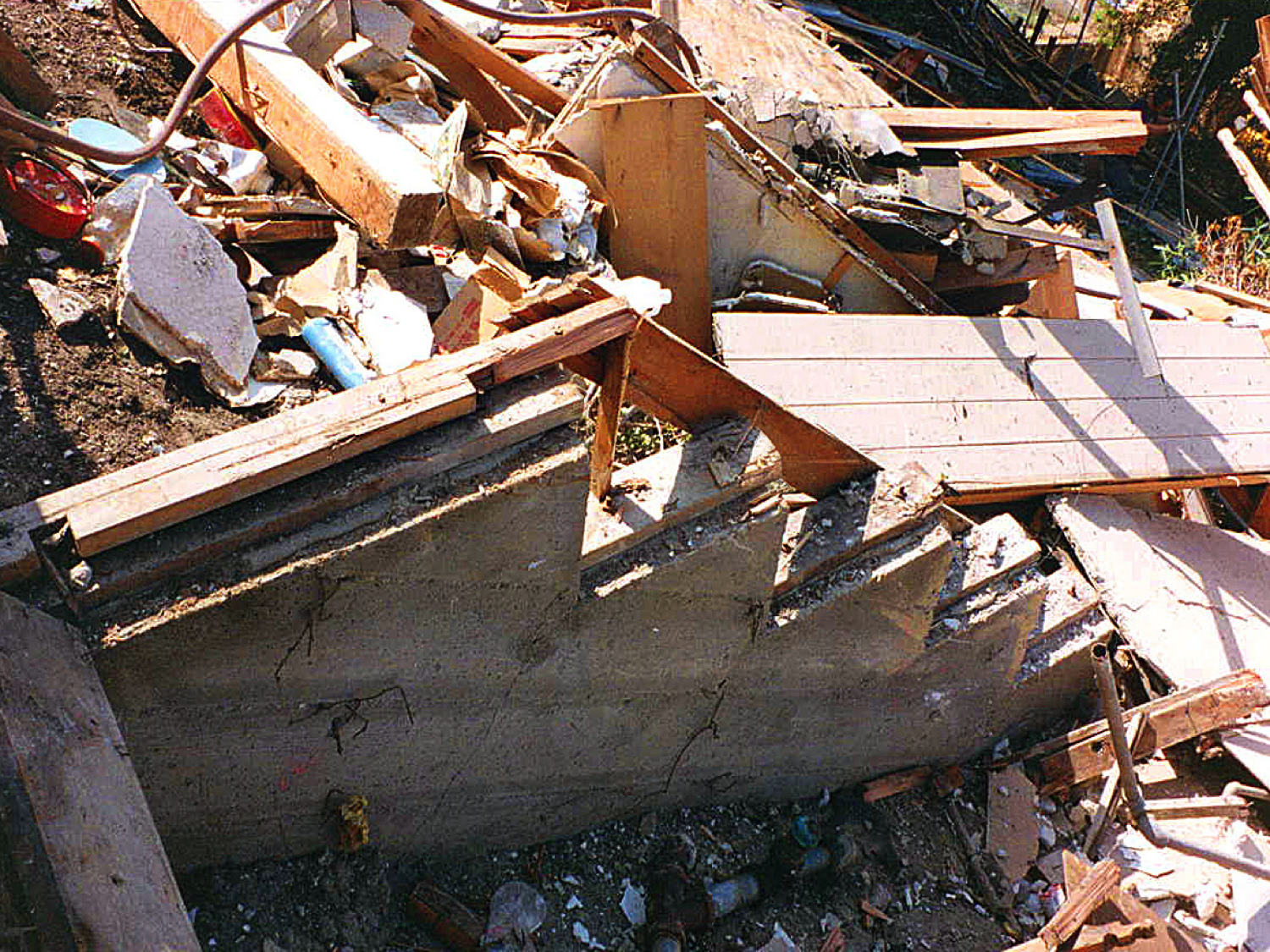 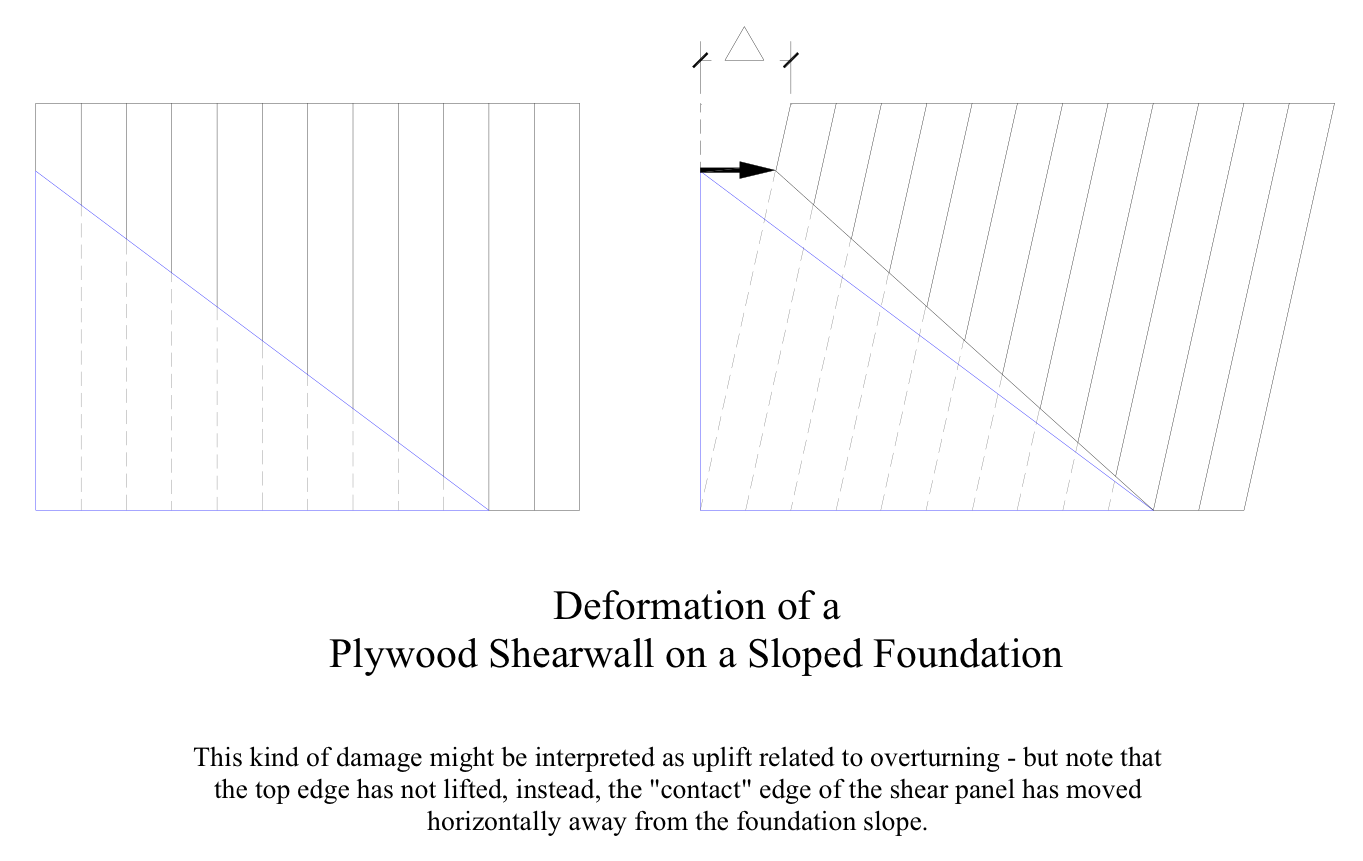 This diagram represents the effects an earthquake has on the shear wall of a sloped foundation. Notice that the short upper end of the shear wall displaced, but the tall lower end remained in place. This kind of damage might be interpreted as uplift related to overturning, however, the top edge has not lifted, instead the upper edge of the shear panel has moved horizontally away from the foundation slope. 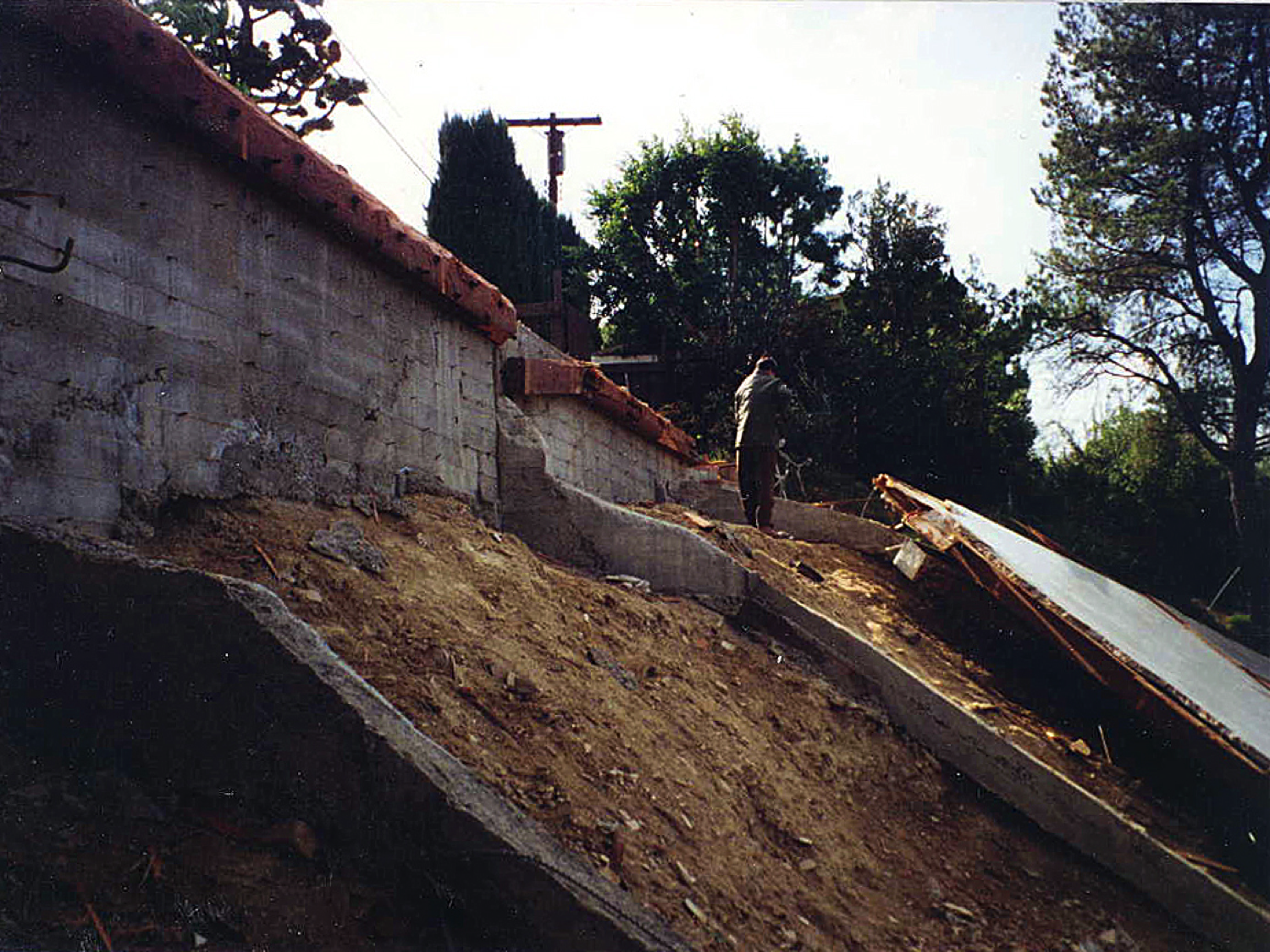 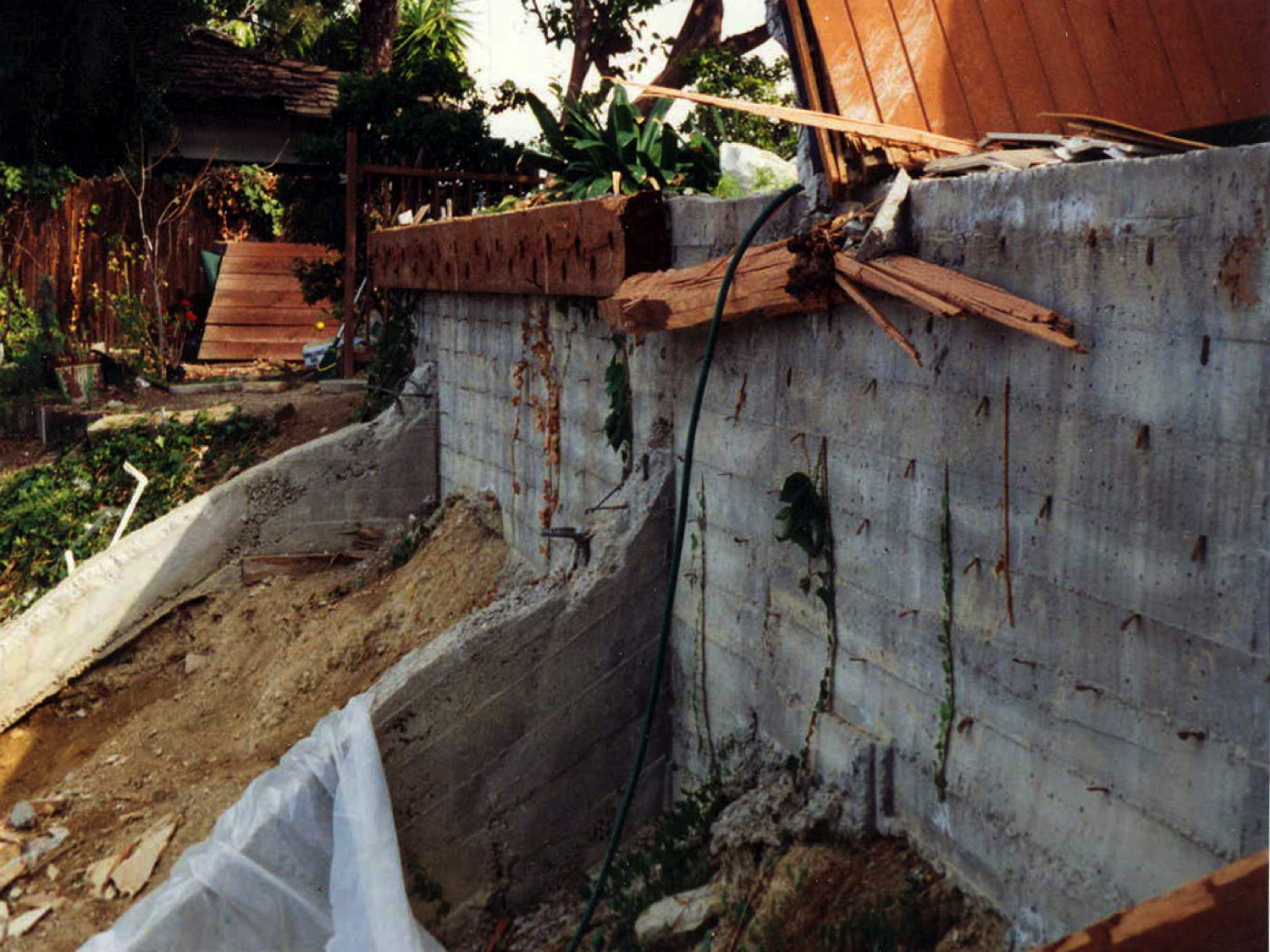 Photo of a sloped foundation.

The photographer, after taking this picture, turned to his right and took his next photo. 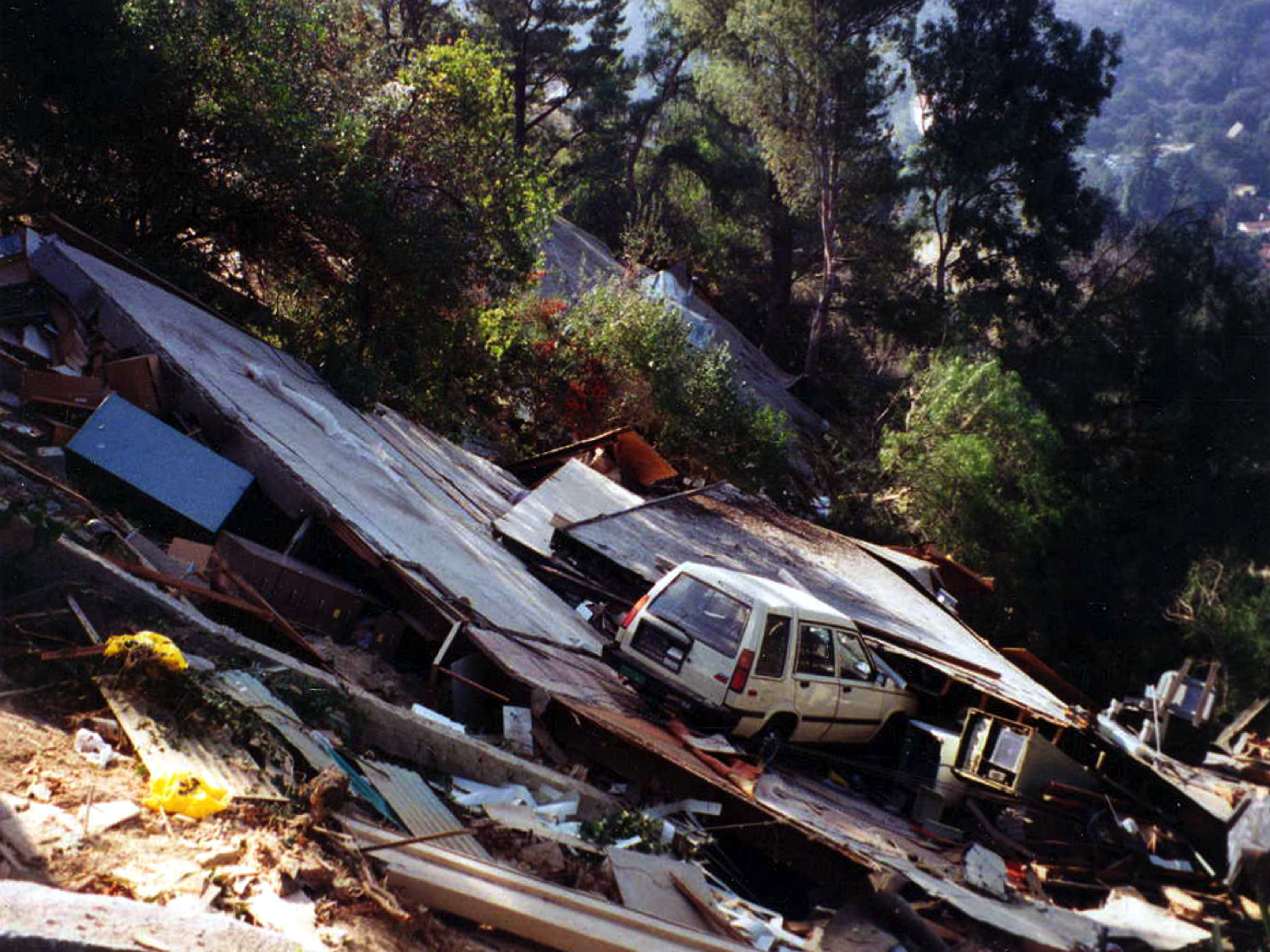 These are the remains of the house that disconnected from the uphill ledger and fell down the hill. Notice the line of trees just beyond the rubble and the debris past the trees. 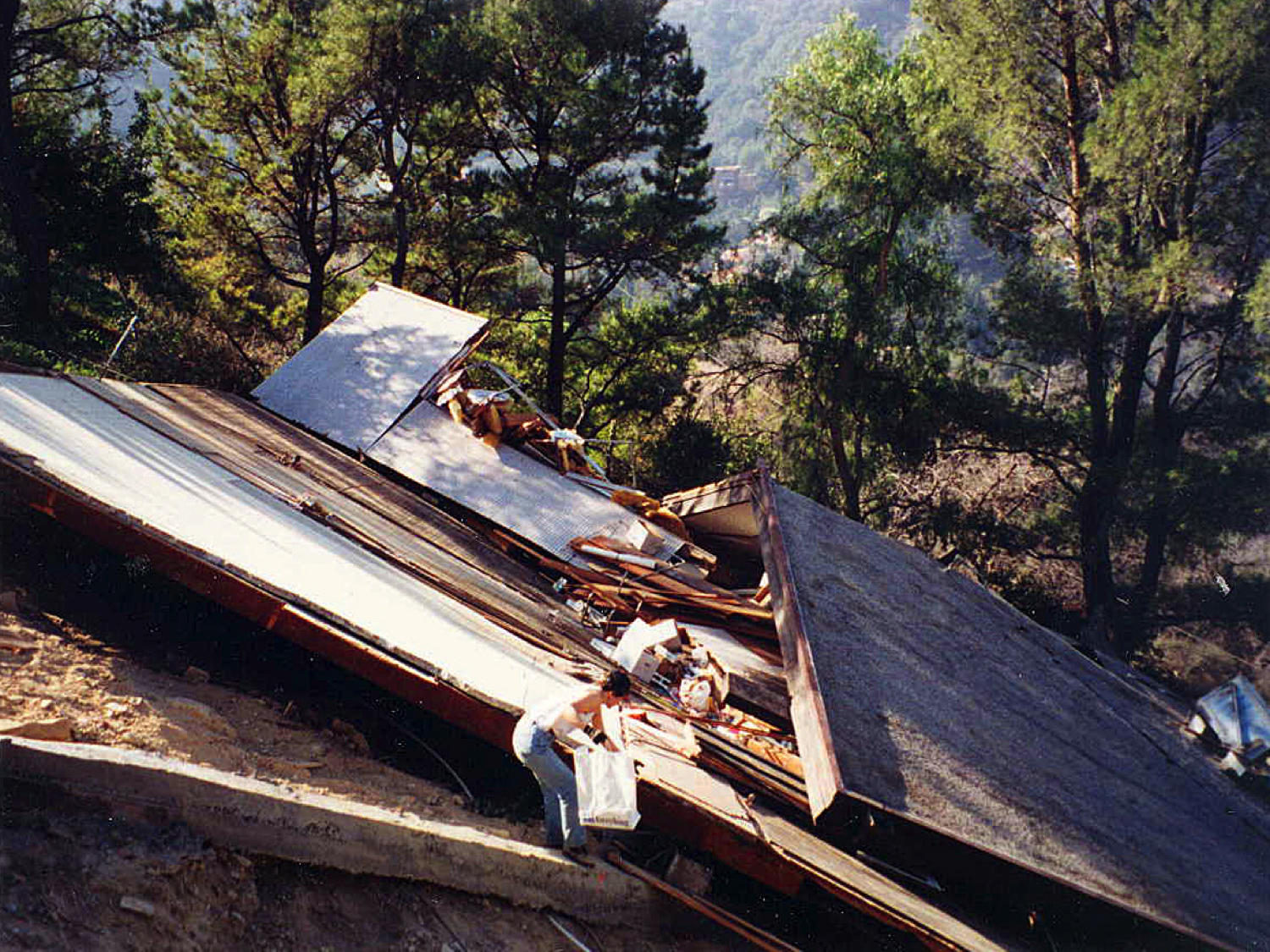 This is the debris beyond the trees….the next door neighbor’s house. Notice that the floor diaphragm and roof are intact. All supporting structures are totally destroyed.

The Main Floor Being Pushed Down the Hill

A typical hillside home with hillside hazards. Picture in your mind where the main floor level of this house is located and the downstairs walls that support it. 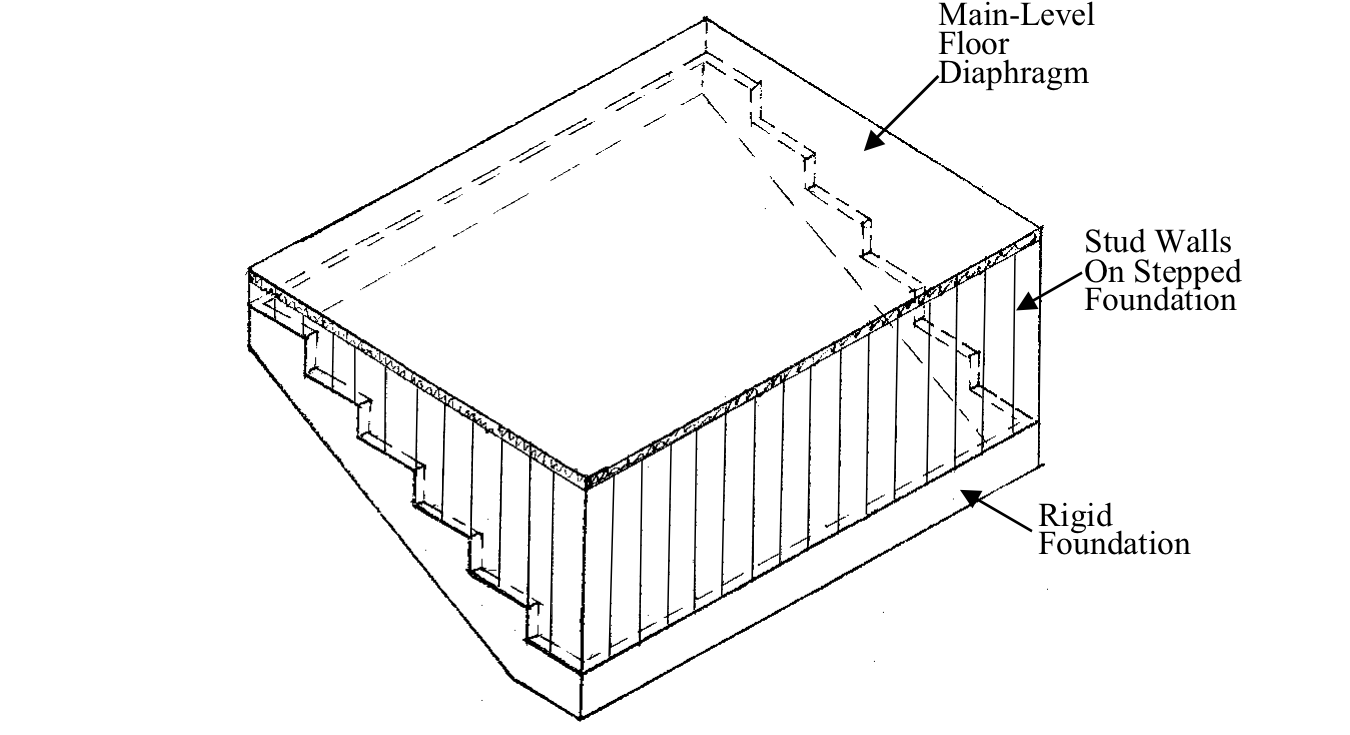 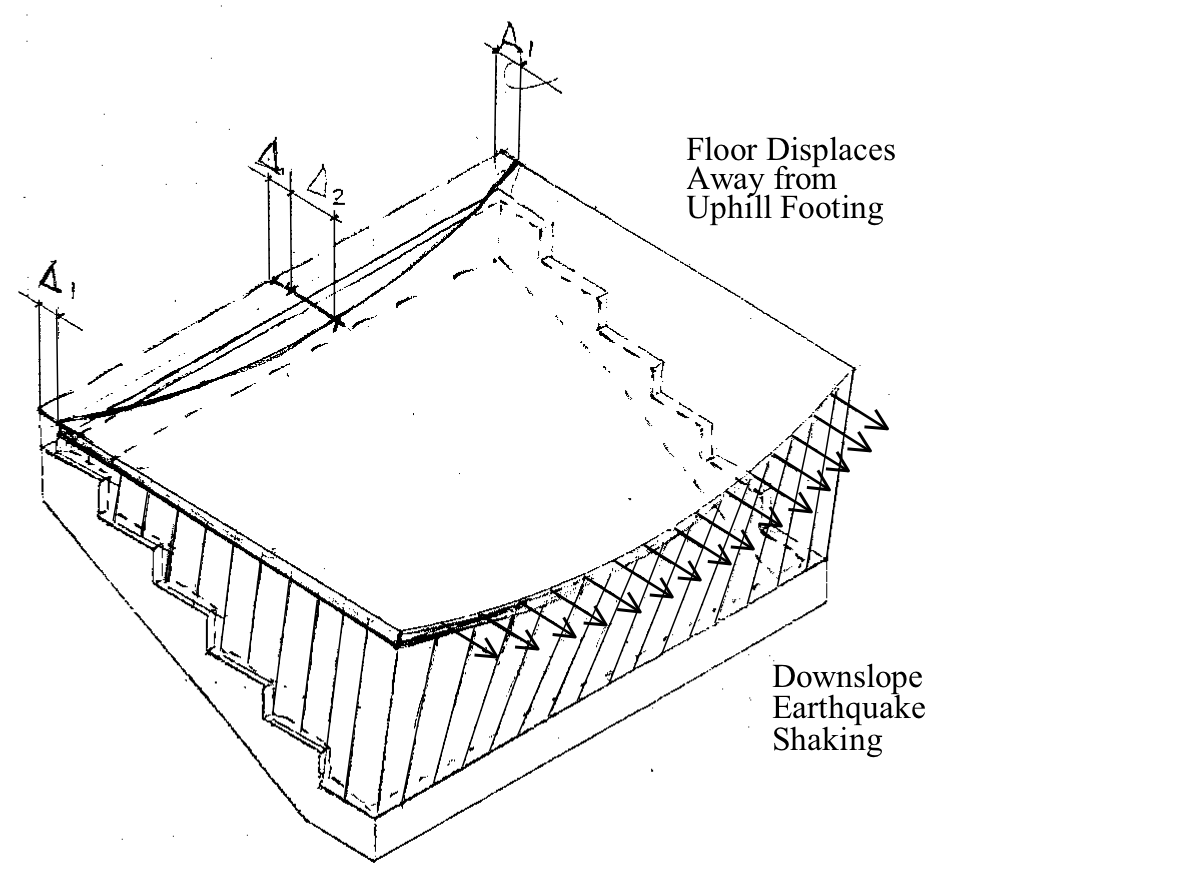 Damage Caused by Rotation of the Floor 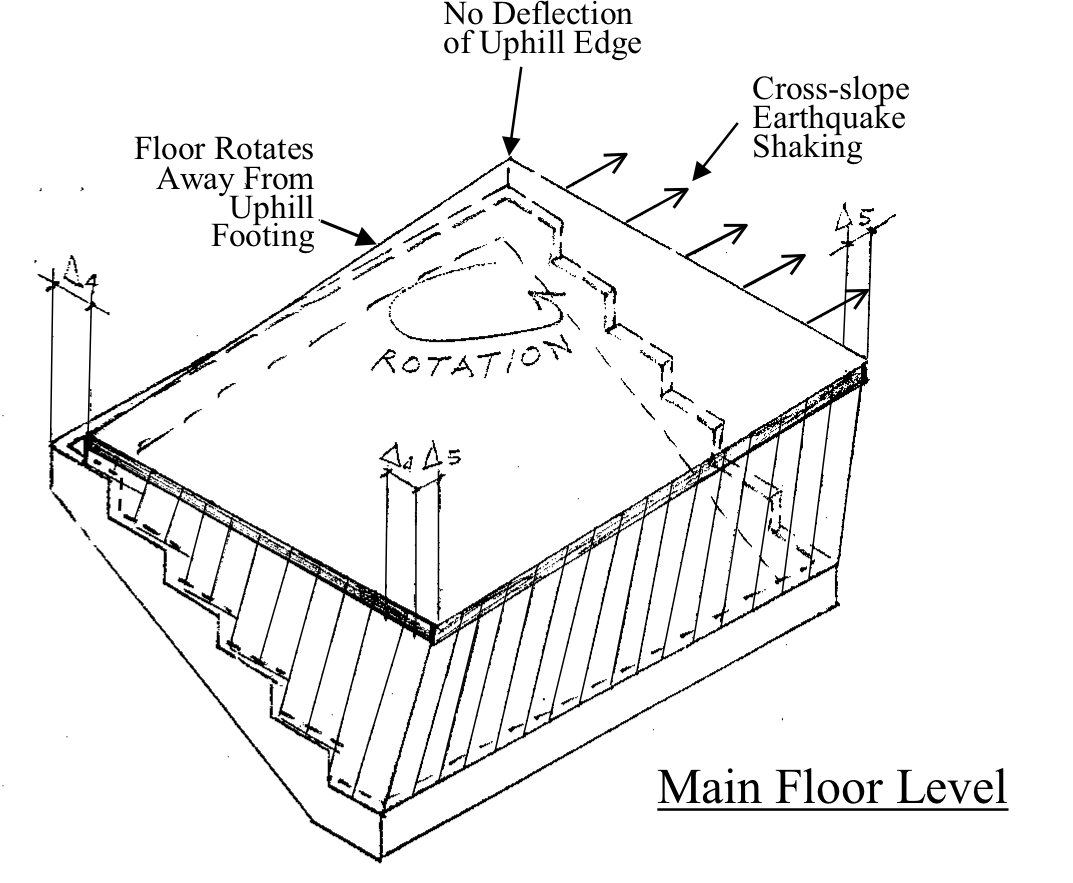 This drawing demonstrates the effect of cross-slope forces on a hillside home. The main floor remains secure at an uphill corner then rotates around that point, moving the house away from the hill. In reality, earthquake forces attack a house from all directions; the combined effect is a circular motion familiar to people living in earthquake country. 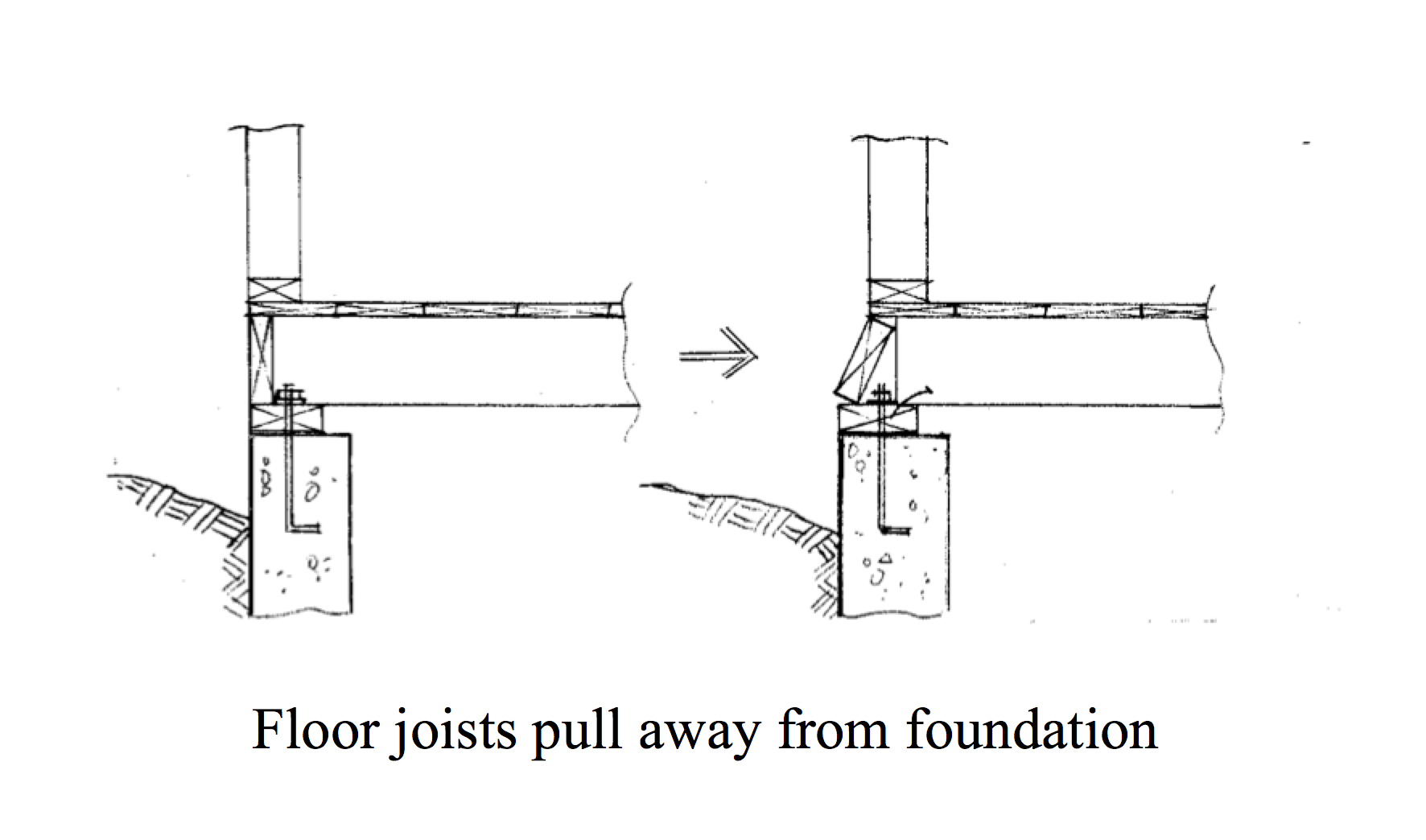 Next we’ll look at factors the Southern California Task Force found contributed to hillside homes becoming detached from their foundation. Preventing these factors is the goal for retrofitting hillside homes. In this illustration, earthquake forces pull the floor joists off the mudsill. The joists move on the mudsill, pull out the nails holding them in place, slide off the mudsill, fall off the foundation and tumble down the hill. 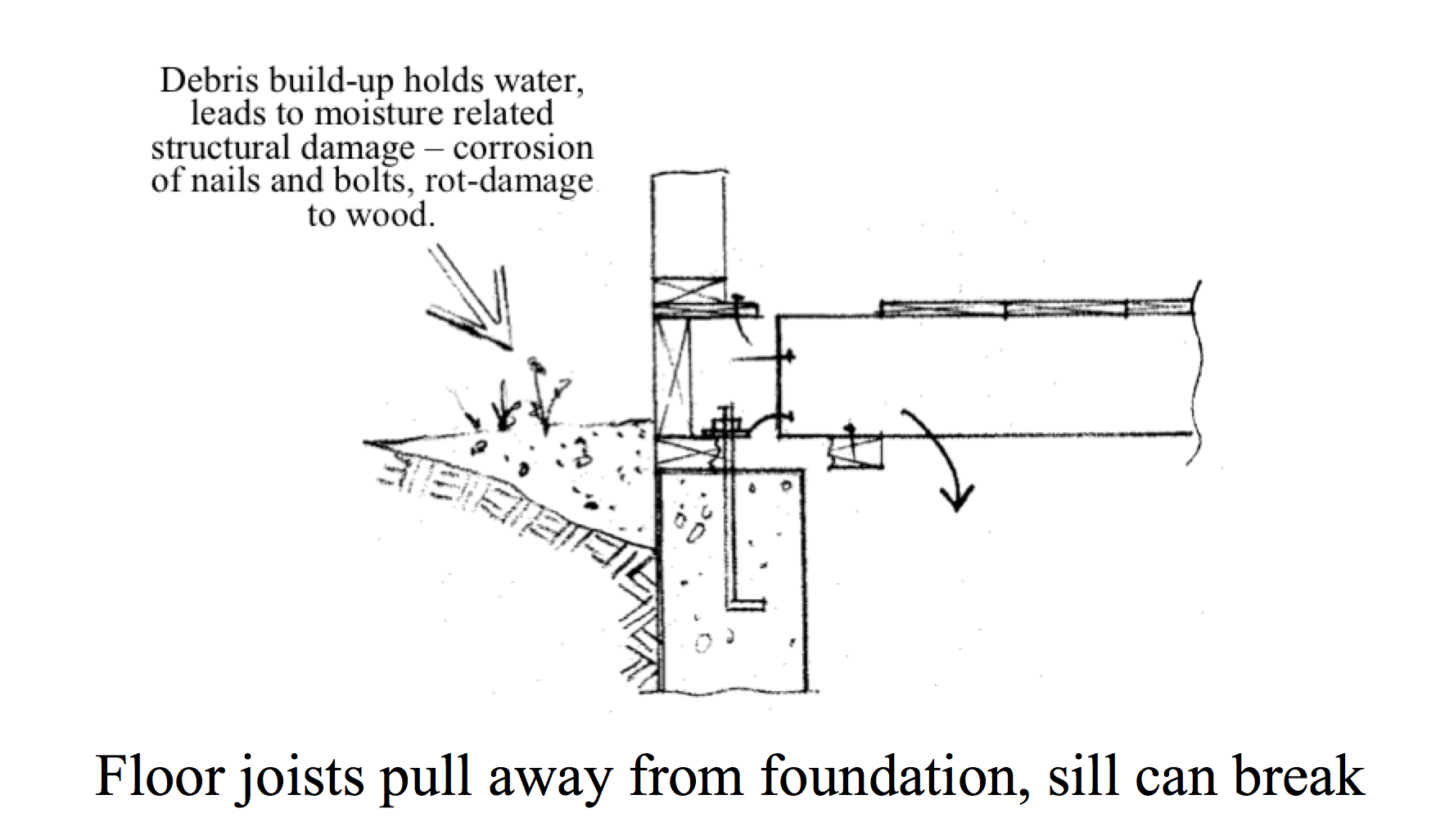 Debris built up at the base of the house raises the soil level above the foundation level, resulting in moisture-related structural damage. Corrosion of nails and bolts, and rot damage to wood undermine the mudsill and the joist-to-mudsill connection. When earthquake forces pull on the joist, the connection is too weak to resist destruction.

In this situation the contractor nailed the floor joist to the ledger after he bolted the ledger to the foundation wall. If, due to deformation of the shear walls, displacement of the house is great enough, the joists pull free of their nailed connection and the main floor level falls from the ledger support. 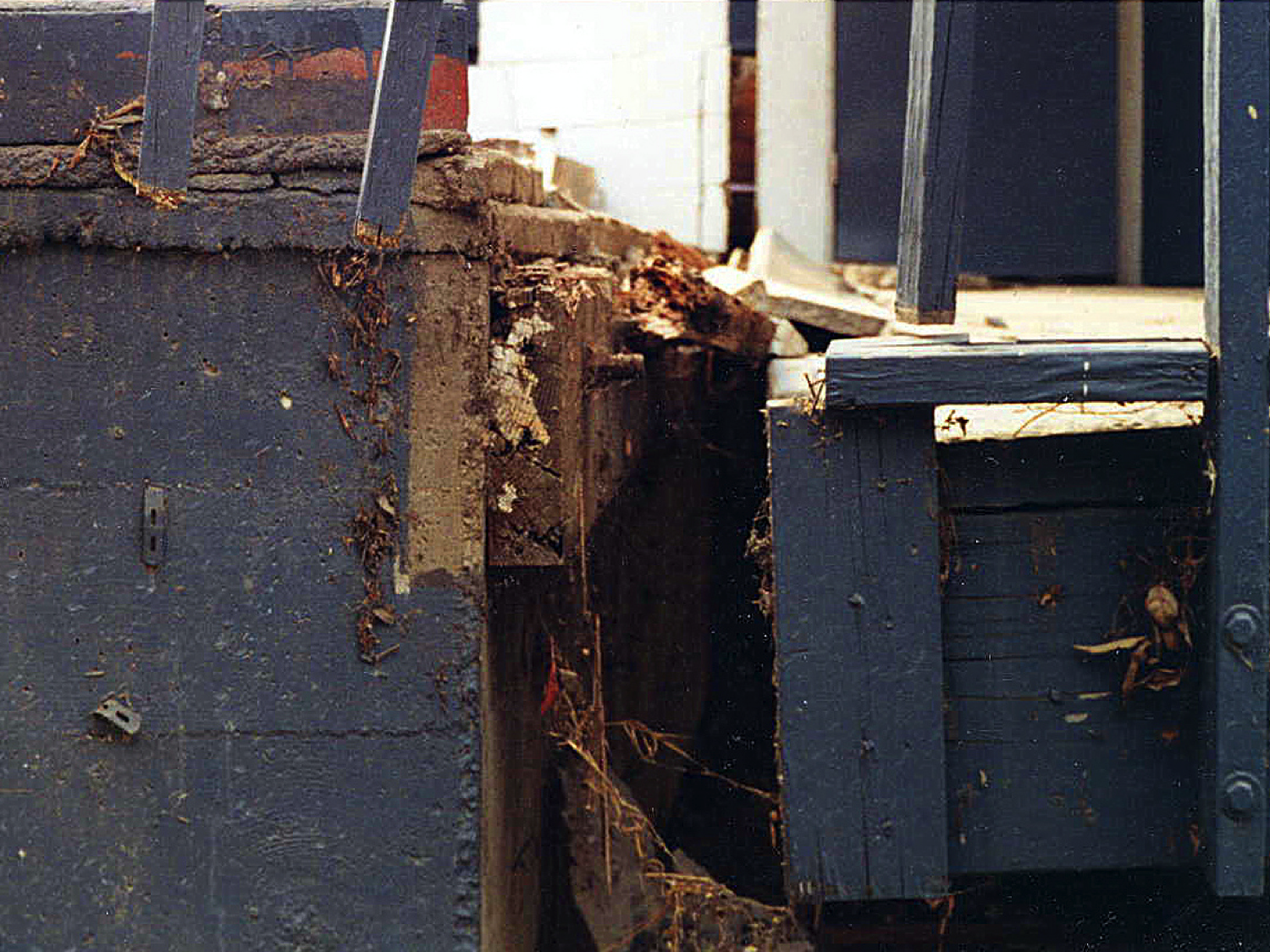 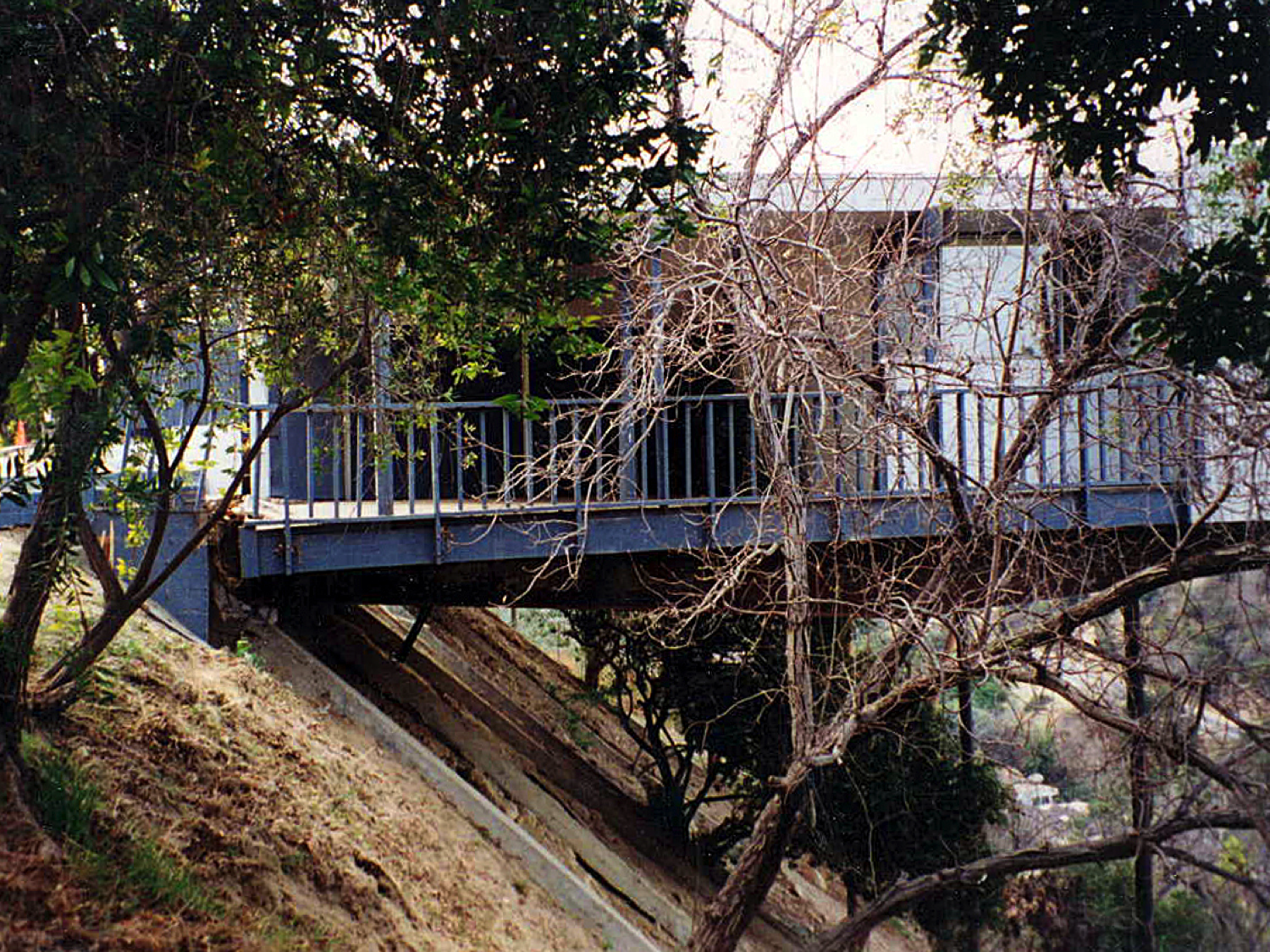 Imagine if the ledger had detached completely; the house would not have survived the downhill plunge. 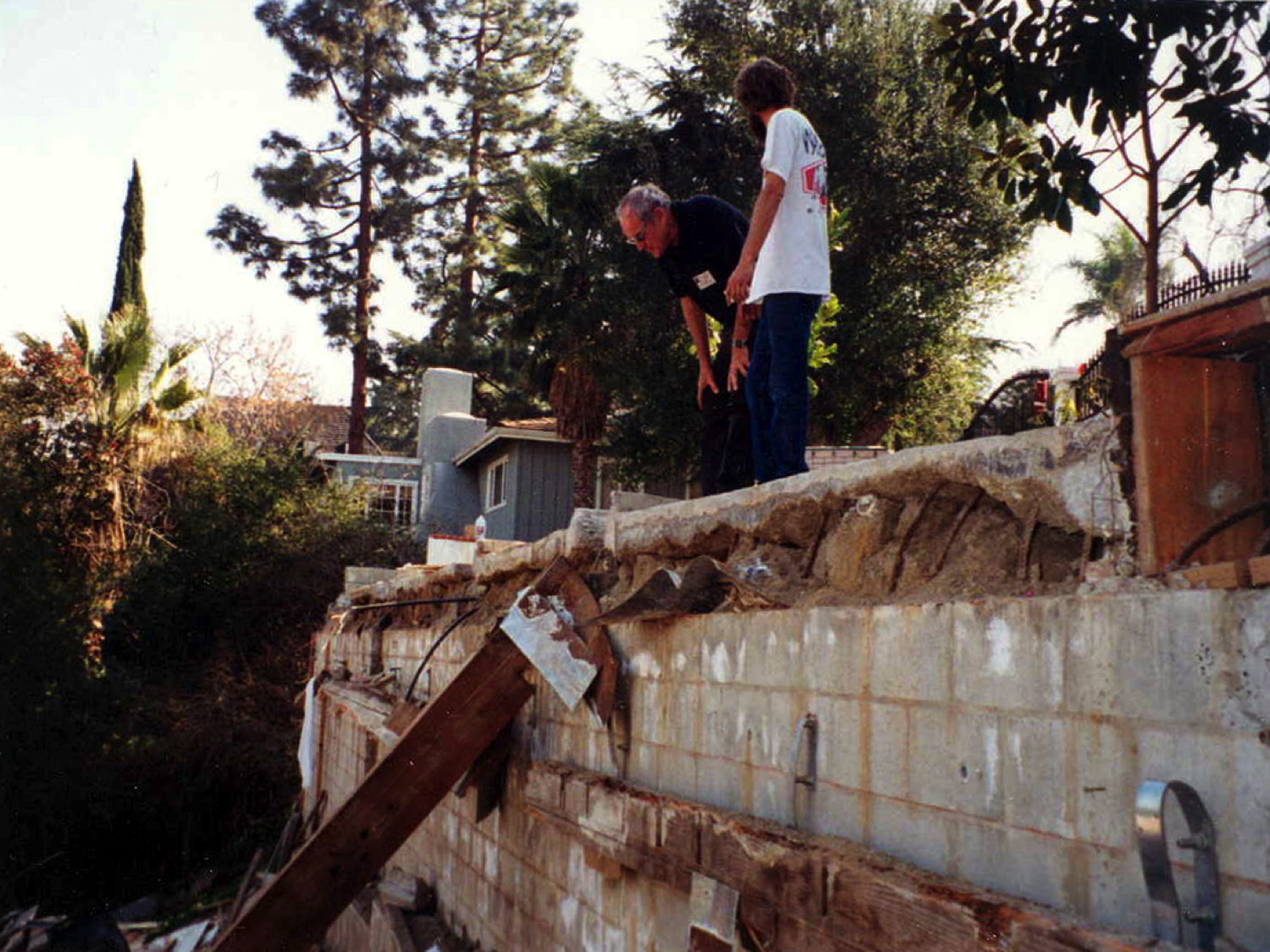 This photo shows where a concrete slab ripped away from its uphill attachment….possibly the house in the picture shown at the beginning of this presentation. 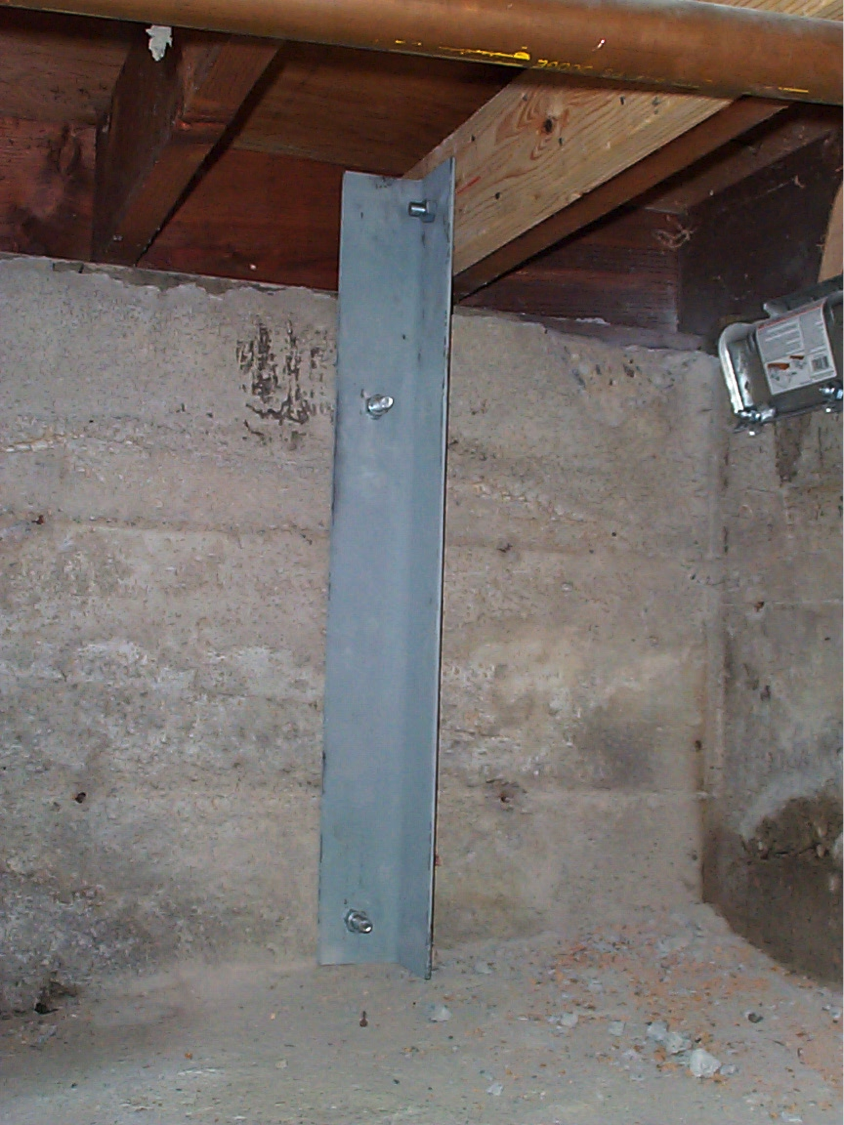 An angle iron secondary anchor. It is difficult to get a scale of the actual size of the anchors we will be showing. In this photograph, the metal is 4 inches wide by ¼ inch thick. This anchor is almost three feet tall. 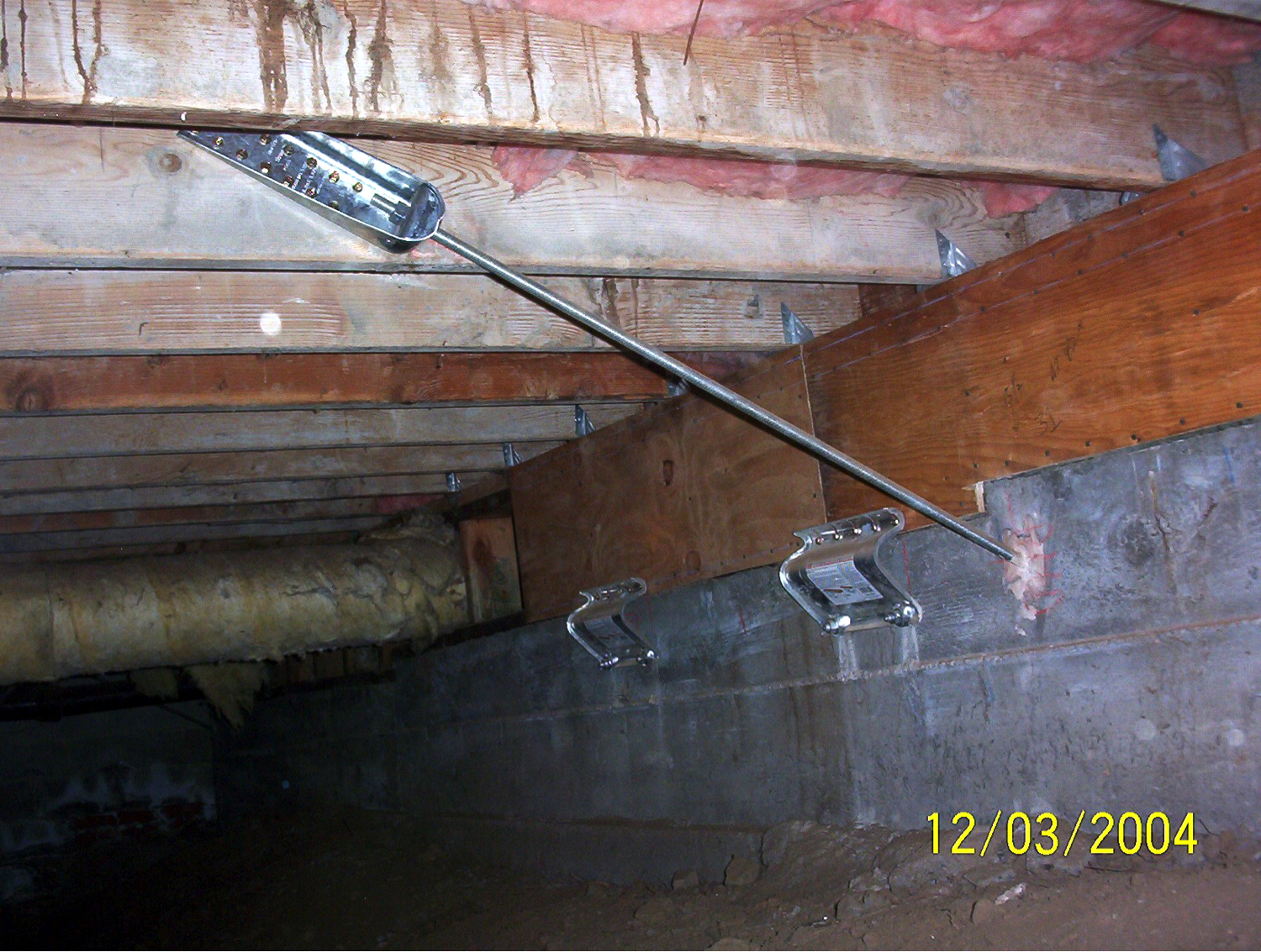 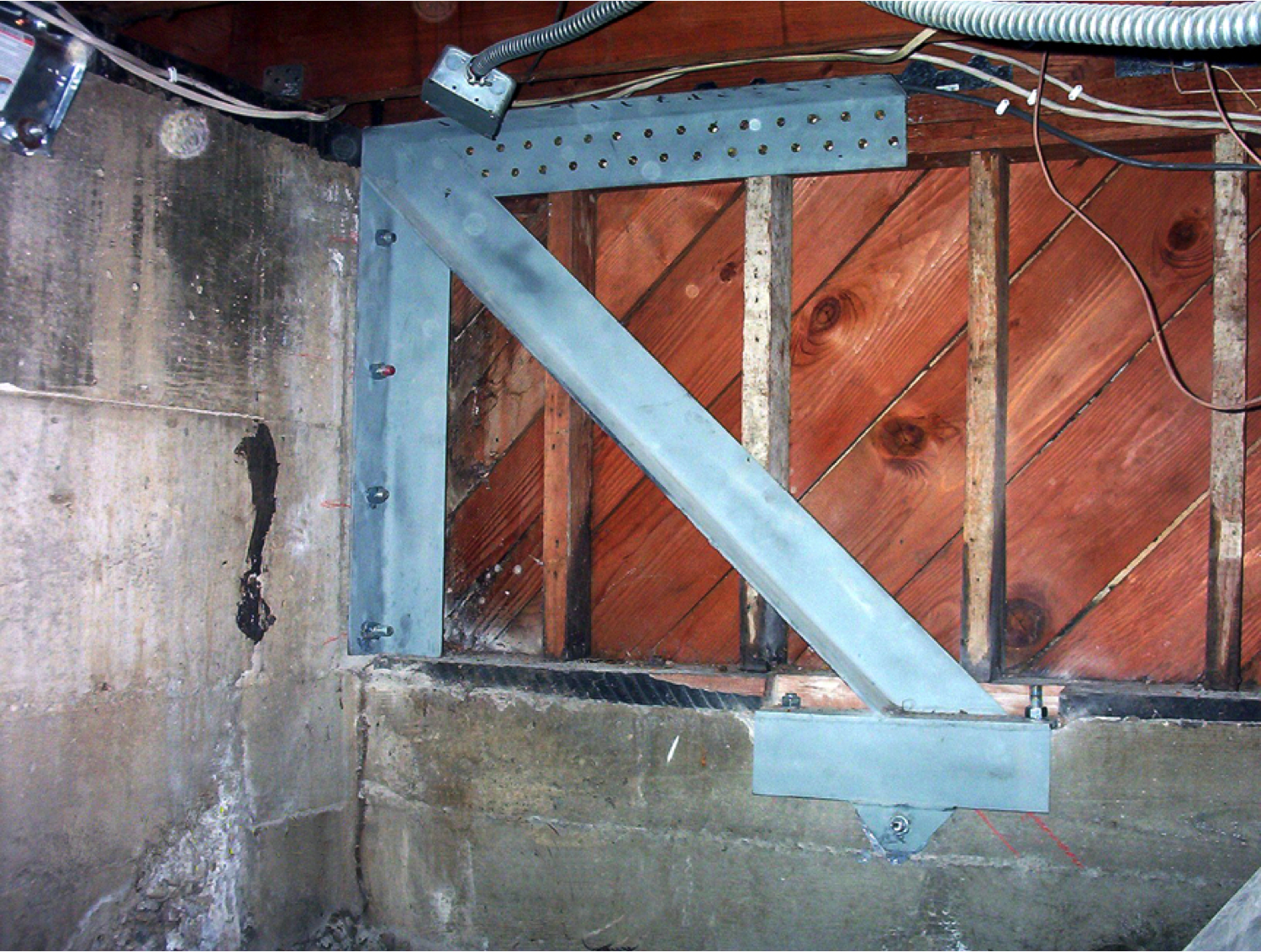 A photo of a primary anchor bolted built from the previous detail. 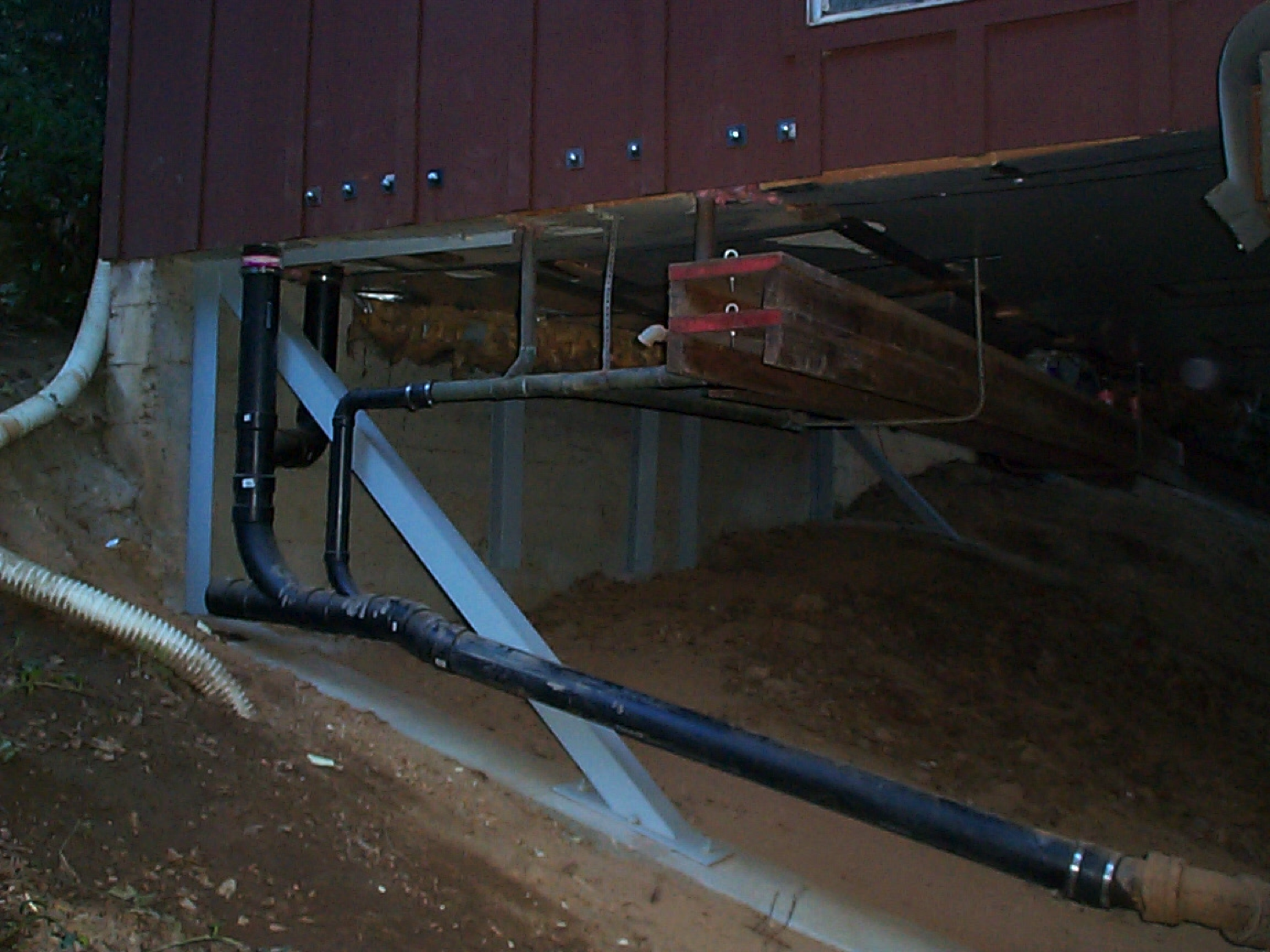 The contractor welded all the components together on site as shown in this primary anchor. 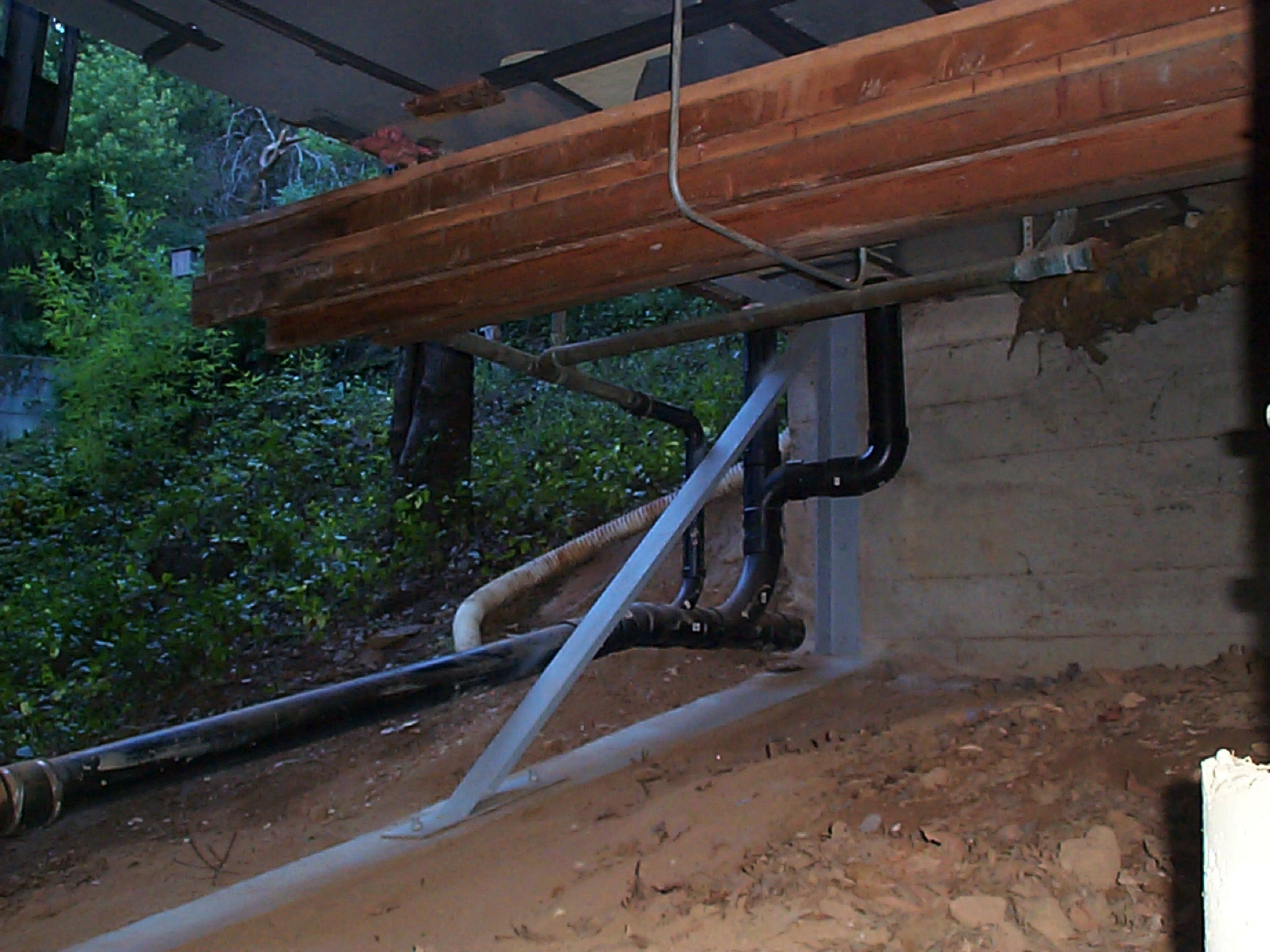